Dr. Yu-Gang Jiang is an associate professor and doctoral advisor in the School of Computer Science at Fudan University, Shanghai. He directs the Big Video Data Analytics (BigVid) Lab, focusing on the development of novel algorithms and systems to better understand big video data. He has published nearly 80 papers in top venues with 2800+ citations according to Google Scholar (h-index=26). He is an active participant of several international benchmark evaluations. At the U.S. NIST TREC video retrieval evaluation, systems designed by him achieved top performance in 2008 video concept detection task and 2010 multimedia event detection task. He also developed VIREO-374 and CU-VIREO374, two large sets of visual concept classifiers that are popularly used worldwide. His work has led to many awards, including an "Emerging Leader in Multimedia" Award from IBM T.J. Watson Research in 2009, an Early Career Faculty Award from Intel and CCF in 2013, and the prestigious 2014 ACM China Rising Star Award. He has served on the committees of many conferences and is currently a technical program chair of ACM ICMR 2015 in Shanghai. 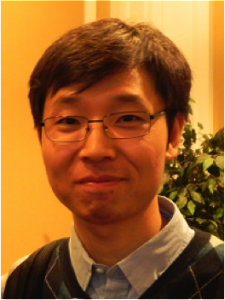 ACM Special Interest Group on Multimedia (SIGMM) is pleased to present this year’s Rising Star Award in multimedia computing, communications and applications to Dr. Yu-Gang Jiang. The ACM SIGMM Rising Star Award recognizes a young researcher who has made outstanding research contributions to the field of multimedia computing, communication and applications during the early part of his or her career. Dr. Yu-Gang Jiang has made fundamental contributions in the area of video analysis and retrieval, especially with innovative approaches to large-scale video concept detection. He has been an active leader in exploring the bag-of-visual-words (BoW) representation for concept detection, providing influential insights on the critical representation design. He proposed the important idea of “soft-weighting” in his CIVR 2007paper, which significantly advanced the performance of visual concept detection. Dr. Jiang has proposed several important techniques for video and image search. In 2009, he proposed a novel domain adaptive concept selection method for concept-based video search. His method selects the most relevant concepts for a given query considering not only the semantic concept-to-query relatedness but also the data distribution in the target domain. Recently he proposed a method that generates query-adaptive hash codes for improved visual search, with which a finer-grained ranking of search results can be achieved compared to the traditional hashing based methods. His most recent work is in the emerging field of video content recognition by deep learning, where he proposed a comprehensive deep learning framework to model static, short-term motion and long-term temporal information in videos. Very promising results were obtained on the widely used UCF101 dataset. As a postdoctoral researcher at Columbia University and later as a faculty member at Fudan University, Dr. Jiang has devoted significant efforts to video event recognition, a problem that is receiving increasing attention in the multimedia community. His extensive contributions in this area include not only innovative algorithm design, but also large benchmark construction, system development, and survey tutorials. He devised a comprehensive system in 2010 using multimodal features, contextual concepts and temporal clues, which won the multimedia event detection (MED) task in NIST TRECVID 2010. He constructed the Columbia Consumer Video (CCV) benchmark in 2011, which has been widely used. Recently, he continues to lead major efforts in creating and sharing large-scale video datasets in critical areas (including 200+ event categories and 100,000 partially copy videos) as community resources. The high impact of his works is reflected by the high number of citations of his work. His recent paper on video search result organization received the Best Poster Paper Award at ACMMM 2014. His shared benchmark datasets and source codes have been used worldwide. In addition, he has made extensive contributions to the professional communities by serving as conference program chairs, invited speakers, and tutorial experts. In summary, Dr. Yu-Gang Jiang receives the 2015 ACM SIGMM Rising Star Award for his significant contributions in the areas of video content recognition and search.