The meeting was distinguished by the Prime Time Engineering Emmy Award from the Academy of Television Arts & Sciences (ATAS) for the longevity of the first JPEG standard. Furthermore, a very successful workshop on JPEG emerging technologies was held at Microsoft premises in Silicon Valley with a broad participation from several companies working in imaging technologies. This workshop ended with the celebration of two JPEG committee experts, Thomas Richter and Ogawa Shigetaka, recognized by ISO outstanding contribution awards for the key roles they played in the development of JPEG XT standard.

The 85th JPEG meeting continued laying the groundwork for the continuous development of JPEG standards and exploration studies. In particular, the developments on new image coding standard JPEG XL,  the low latency and complexity standard JPEG XS, and the release of the JPEG Systems interoperable 360 image standard, together with the exploration studies on image compression using machine learning and on the use of blockchain and distributed ledger technologies for media applications.

The 85th JPEG meeting had the following highlights:

The JPEG committee is honored to be the recipient of a prestigious Prime Time Engineering Award in 2019 by the US Academy of Television Arts & Sciences at the 71st Engineering Emmy Awards ceremony on the 23rd of October 2019 in Los Angeles, CA, USA. The first JPEG standard is known as a popular format in digital photography, used by hundreds of millions of users everywhere, in a wide range of applications including the world wide web, social media, photographic apparatus and smart cameras. The first part of the standard was published in 1992 and has grown to seven parts, with the latest, defining the reference software, published in 2019. This is a unique example of longevity in the fast moving information technologies and the Emmy award acknowledges this longevity and continuing influence over nearly three decades. 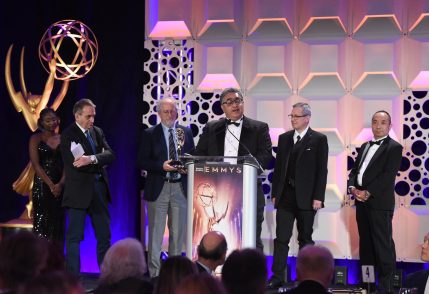 This is a well-deserved recognition not only for the Joint Photographic Experts Group committee members who started this standard under the auspices of ITU, ISO, IEC but also to all experts in the JPEG committee who continued to extend and maintain it, hence guaranteeing such a longevity.

According to Prof. Touradj Ebrahimi, Convenor of JPEG standardization committee, the longevity of JPEG is based on three very important factors: “The credibility by being developed under the auspices of three important standardization bodies, namely ITU, ISO and IEC, development by explicitly taking into account end users, and the choice of being royalty free”. Furthermore,  “JPEG defined not only a great technology but also it was a committee that first defined how standardization should take place in order to become successful”.

At the 85th JPEG meeting in San Jose, CA, USA, JPEG organized the "JPEG Emerging Technologies Workshop" on the 5th of November 2019 to inform industry and academia active in the wider field of multimedia and in particular in imaging, about current JPEG Committee standardization activities and exploration studies. Leading JPEG experts shared highlights about some of the emerging JPEG technologies that could shape the future of imaging and multimedia, with the following program:

This very successful workshop ended with a panel moderated by Fernando Pereira where different relevant media technology issues were discussed with a vibrant participation of the attendees.

Proceedings of the JPEG Emerging Technologies Workshop are available for download via the following link: https://jpeg.org/items/20191108_jpeg_emerging_technologies_workshop_proceedings.html

The JPEG XL Image Coding System (ISO/IEC 18181) continues its progression towards a final specification. The Committee Draft of JPEG XL is being refined based on feedback received from experts from ISO/IEC national bodies. Experiments indicate the main two JPEG XL modes compare favorably with specialized responsive and lossless modes, enabling a simpler specification.

The JPEG committee has approved open-sourcing the JPEG XL software. JPEG XL will advance to the Draft International Standard stage in 2020-01.

JPEG AI carried out rigorous subjective and objective evaluations of a number of promising learning-based image coding solutions from state of the art, which show the potential of these codecs for different rate-quality tradeoffs, in comparison to widely used anchors. Moreover, a wide set of objective metrics were evaluated for several types of image coding solutions.

Fake news, copyright violations, media forensics, privacy and security are emerging challenges in digital media. JPEG has determined that blockchain and distributed ledger technologies (DLT) have great potential as a technology component to address these challenges in transparent and trustable media transactions. However, blockchain and DLT need to be integrated closely with a widely adopted standard to ensure broad interoperability of protected images. Therefore, the JPEG committee has organized several workshops to engage with the industry and help to identify use cases and requirements that will drive the standardization process. During the San Jose meeting, the committee drafted a first version of the use cases and requirements document. On the 21st of January 2020, during its 86th JPEG Meeting to be held in Sydney, Australia, JPEG plans to organize an interactive discussion session with stakeholders. Practical and registration information is available on the JPEG website. To keep informed and to get involved in this activity, interested parties are invited to register to the ad hoc group’s mailing list. (http://jpeg-blockchain-list.jpeg.org).

The ISO/IEC 19566-5 JUMBF and ISO/IEC 19566-6 JPEG 360 were published in July 2019.  These two standards work together to define basics for interoperability and lay the groundwork for future capabilities for richer interactions with still images as we add functionality to JUMBF (Part 5), Privacy & Security (Part 4), JPEG 360 (Part 6), and JLINK (Part 7).

JPEG XS aims at standardization of a visually lossless low-latency and lightweight compression that can be used as a mezzanine codec in various markets. Work has been done in the last meeting to enable JPEG XS for use in Bayer image sensor compression. Among the targeted use cases for Bayer image sensor compression, one can cite video transport over professional video links, real-time video storage in and outside of cameras, and data compression onboard of autonomous cars. The JPEG Committee also announces the final publication of JPEG XS Part-3 “Transport and Container Formats” as International Standard. This part enables storage of JPEG XS images in various formats. In addition, an effort is currently on its final way to specify RTP payload for JPEG XS, which will enable transport of JPEG XS in the SMPTE ST2110 framework.

“The 2019 Prime Time Engineering Award by the Academy is a well-deserved recognition for the Joint Photographic Experts Group members who initiated standardization of the first JPEG standard and to all experts of the JPEG committee who since then have extended and maintained it, guaranteeing its longevity. JPEG defined not only a great technology but also it was the first committee that defined how standardization should take place in order to become successful” said Prof. Touradj Ebrahimi, the Convenor of the JPEG Committee.

The JPEG Committee nominally meets four times a year, in different world locations. The 84th JPEG Meeting was held on 13-19 July 2019, in Brussels, Belgium. The next 86th JPEG Meeting will be held on 18-24 January 2020, in Sydney, Australia.