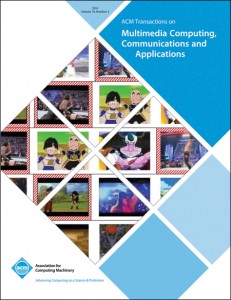 The Editor-in-Chief of ACM TOMM invites you to nominate candidates for the ACM Transactions on Multimedia Computing, Communications and Applications Nicolas D. Georganas Best Paper.

The award is given annually to the author(s) of an outstanding paper published in print in ACM TOMM within the previous legal year from January 1 until December 31. The award carries a plaque as well as travel funds to the ACM MM conference where the awardee(s) will be honored. Nominations for the award must include the following:

Nominations will be reviewed by the Selection Committee and the winning paper will finally be voted by the TOMM Editorial Board.

Please send your nominations and any questions to the Editor-in-Chief at steinmetz.eic@kom.tu-darmstadt.de.