In modern societies there is a growing requirement for public administrations to directly communicate with their citizens, view the existing problems from their perspective and re-act to their needs. In meeting this requirement, modern technologies have become a particularly valuable instrument that, apart from being a rich source of information, is also an integral part of our daily activities. Web and mobile civic engagement apps are able to transform citizens into the living sensors of their city and, in this way, help them to actively participate in the improvement of their neighborhood. Fulfilling this goal, ImproveMyCity is a platform that, on the one hand, enables citizens to directly report issues about their neighborhood (e.g. potholes, illegal trash dumping, faulty street lights, broken tiles on sidewalks, and illegal advertising boards), and, on the other hand, provides the necessary back-end infrastructure and interfaces for public servants to keep track of the reported issues, schedule their settlement and provide feedback to the citizen about the progress status. The reported cases go directly into the city’s work order queue for resolution, and users are informed how quickly the case will be closed. When cases are resolved the date and time of the resolution is listed, providing users with the sense that the city is on the job. In this way, ImproveMyCity helps Municipalities to enlist new segments of the population —people who had not previously participated in government—and bring their concerns, insight, energy, and commitment to reinvigorate not only the city but also the government.

The ImproveMyCity platform is structured as a client-server application and is implemented as an extension of the Joomla framework. The platform consists of a web- based portal for allowing citizens to report issues from their desktop PC, a smartphone application for android devices that allows citizens to do the same process through their mobile phone and a back-end infrastructure for allowing the governmental agencies to easily handle the reported issues. The source code is available in GitHub both for the web-based front-end and the back-end infrastructure, as well as for the mobile front-end. All source codes are provided with detailed user guides explaining how to download and install the applications and are licensed under the under the GNU Affero General Public License. The web-based front-end and back-end infrastructure are also available through the official Joomla Extension Directory (JED).

The service model of ImproveMyCity is based on three main pillars: Report – Administer – Analyze. City residents are urged to directly report to their public administration local issues about their neighborhood. Subsequently, the reported issues are automatically transmitted to the appropriate office in public administration so as to schedule their settlement. The administration (i.e. management and routing) of incoming issues is performed through a back-end infrastructure that serves as an integrated management system, allowing the governmental agencies to easily handle the reported issues. Finally, data analysis is performed through a visual analytics tool that employs heatmap-based visualizations and spatio-temporal filters with the aim to offer decision makers valuable insights for improving the city operation. The key features can be summarized as follows:

The ImproveMyCity platform consists of four main interaction components: a) The web-based front-end for reporting issues through a desktop PC, b) The smartphone-based front-end for reporting issues through a mobile phone, c) the back-end infrastructure and related interfaces for administering the incoming issues, and d) the analyics component for visualizing the reported issues in an interactive manner.

Since the web-based front-end and the back-end infrastructure and interfaces are developed as standard Joomla components, their installation and running is a plain process. Indeed after a few simple steps the ImproveMyCity back-end infrastructure and the web-based front-end are ready to be used and administered. Similarly, the mobile front-end requires a few extra steps, so as to connect with the server and get synchronized with the web-based front-end. Moreover, due to its nature, ImproveMyCity has been specifically designed to make fully customizable all parameters needed to localize the platform for a certain city. In this respect all language-related menus, geo-positioning related parameters and layout options, are accessible through external files that can be easily edited. Moreover, particular attention has been placed on language-based localization by initiating and maintaining a crowdsourcing project in Transifex.

ImproveMyCity has been developed in close cooperation with the end-users in a co-design process with successive innovation cycles. More specifically, particular attention has been paid in engaging the end-users during the functional and aesthetic design of the application. After identifying the end-user groups (i.e. city stakeholders, citizens, service providers and city visitors), the development team of ImproveMyCity has followed a systematic approach for bringing these groups into the application design loop, including: a) Users’ briefing through informative events focused on specific topics / user groups – including their follow-ups, informative media (demos / videos / newsletters / posters / text messages / forums) to communicate information to users, b) Gathering user’s feedback, by asking users to provide information about their opinion or specific ideas or initiatives, as part of the application optimization process, c) Lead users’ engagement in testing, which encouraged the involvement of users in planning specific actions and influencing decisions. This included one-off, specifically focused events, working groups, focus groups, workshops, questionnaires and interviews. In implementing the aforementioned approach the team of ImproveMyCity has developed a number of early demos that were communicated to the end-users (together with a survey questionnaire) through the official portal of the Municipality. Subsequently, the end users were asked to get familiarized with the version.0 of the application, interact with the demos and complete the questionnaire. At the end of the procedure, all end user groups were familiarized with the demos and they were able to proceed to the evaluation of the applications via the questionnaire. At this point, the development team of ImproveMyCity, taking into consideration the results of the questionnaire, the observations and remarks from lead users and their own experience and opinion; proceeded to the addition of new features and improved the functionality of the initial version, leading to version.1 of the application. This marked the completion of the first innovation cycle. Successive innovation cycles continued to take place as initially designed, until the ImproveMyCity platform reached its final form. 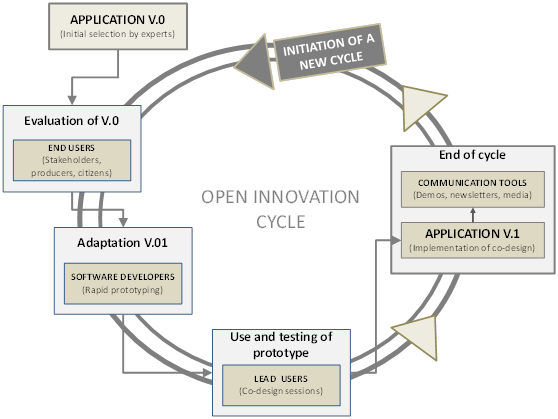 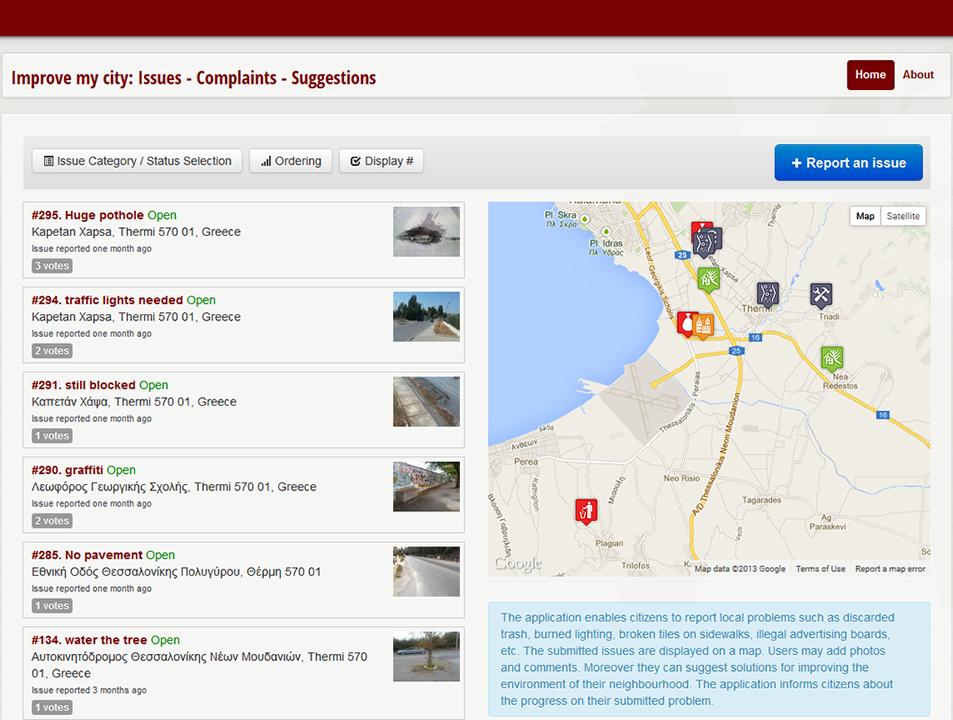 The ImproveMyCity platform was originally deployed in the Municipality of Thermi, Greece in April 2012. One year later more than 500 users were registered, generating more than 585 issues and 1350 comments. Since its official release as an open source software, ImproveMyCity has been viewed more than 15000 times and downloaded more than 3800 times. Based on our current records (June 2014) there are more than 35 intallations (active & pilot) around the globe. Although the idea of engaging citizens into a two-way dialogue with their administration for improving their urban space has been around for some time, e.g. FixMyStreet, SeeClickFix, BuitenBeter, ImproveMyCity is the first integrated solution that is made available as open source and covers the full-chain of information flow, ranging from the desktop user that reports issues from the leisure of his home and the mobile citizen that reports issues while on the move, all the way to the back-end management system for administering the incoming issues and the reports with aggregated statistics for performance assessment and future planning of resources. Moreover, characterized by its simple installation process, its extensive customization options and its minimum requirements in terms of additional hardware or external software libraries, ImproveMyCity is ideal for municipalities that don’t want to invest many resources until they are convinced about the benefits of citizen-government collaboration for urban maintenance and improvement. Our future plans include the extension of the existing back-end infrastructure for administering the incoming issues, with a sophisticated ticketing system that will allow for dynamic responsibility allocation and close progress monitoring. On the mobile side, our next step will be towards becoming more integrated with social media by allowing users to login with their social accounts and share their ImproveMyCity-related activity with their friends.