The 108th MPEG meeting was held at the Palacio de Congresos de Valencia in Spain featuring the following highlights (no worries about the acronyms, this is on purpose and they will be further explained below): 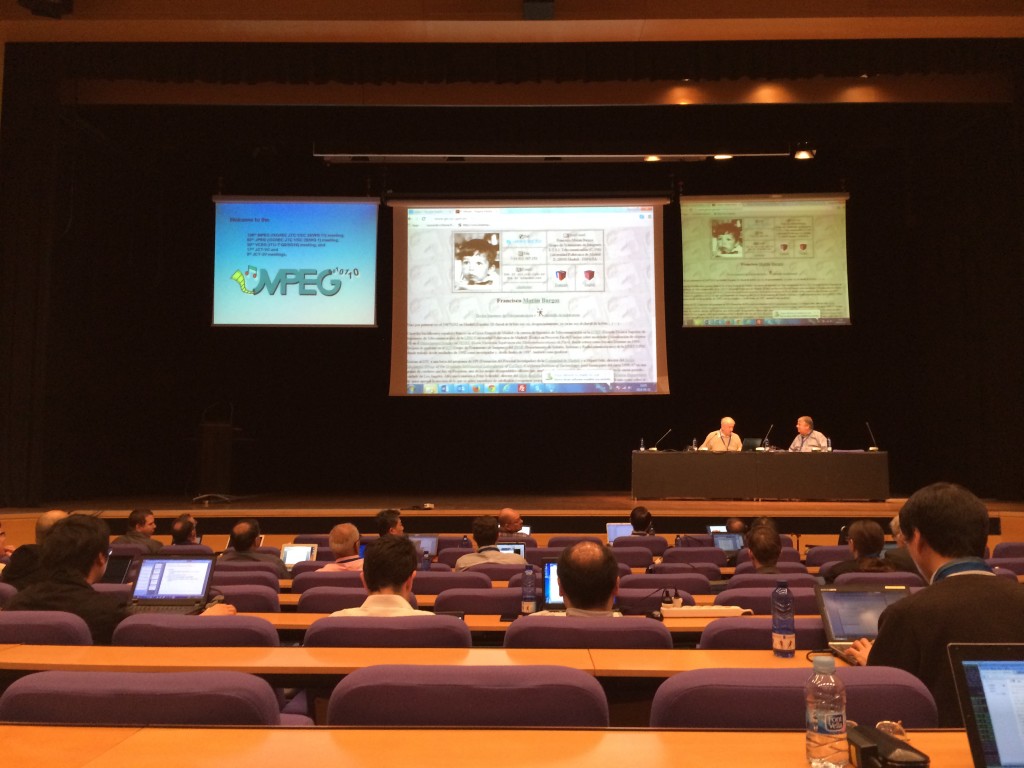 Opening Plenary of the 108th MPEG meeting in Valencia, Spain.

As indicated above, MPEG is full of (new) acronyms and in order to become familiar with those, I’ve put them deliberately in the overview but I will explain them further below.

Publish/subscribe corresponds to a new network paradigm related to content-centric networking (or information-centric networking) where the content is addressed by its name rather than location. An application format within MPEG typically defines a combination of existing MPEG tools jointly addressing the needs for a given application domain, in this case, the publish/subscribe paradigm. The current requirements and a preliminary working draft are publicly available.

I’ve introduced this topic in my previous report and this meeting the responses to the CfP have been evaluated. In total, seven responses have been received which meet all requirements and, thus, the actual standardization work is transferred to JCT-VC. Interestingly, the results of the CfP are publicly available. Within JCT-VC, a first test model has been defined and core experiments have been established. I will report more on this as an output of the next meetings…

At this meeting, various extensions to M2TS have been defined such as transport of multi-view video coding depth information and extensions to HEVC, delivery of timeline for external data as well as carriage of layered HEVC, green metadata, and 3D audio. Hence, M2TS is still very active and multiple amendments are developed in parallel.

The committee draft for MPAF has been approved and, in this context, MPEG-7 is extended with additional description schemes.

Well, this standard does not have its own acronym; it’s simply referred to as MPEG-GREEN. The draft international standard has been approved and national bodies will vote on it at the JTC 1 level. It basically defines metadata to allow clients operating in an energy-efficient way. It comes along with amendments to M2TS and ISOBMFF that enable the carriage and storage of this metadata.

CDVS is at DIS stage and provide improvements on global descriptors as well as non-normative improvements of key-point detection and matching in terms of speedup and memory consumption. As all standards at DIS stage, national bodies will vote on it at the JTC 1 level.

What’s new in the video/audio-coding domain?

As interested readers know from my previous reports, DASH 2nd edition has been approved has been approved some time ago. In the meantime, a first amendment to the 2nd edition is at draft amendment state including additional profiles (mainly adding xlink support) and time synchronization. A second amendment goes to the first ballot stage referred to as proposed draft amendment and defines spatial relationship description, generalized URL parameters, and other extensions. Eventually, these two amendments will be integrated in the 2nd edition which will become the MPEG-DASH 3rd edition. Also a corrigenda on the 2nd edition is currently under ballot and new contributions are still coming in, i.e., there is still a lot of interest in DASH. For your information – there will be two DASH-related sessions at Streaming Forum 2014.

On the other hand, MMT’s amendment 1 is currently under ballot and amendment 2 defines header compression and cross-layer interface. The latter has been progressed to a study document which will be further discussed at the next meeting. Interestingly, there will be a MMT developer’s day at the 109th MPEG meeting as in Japan, 4K/8K UHDTV services will be launched based on MMT specifications and in Korea and China, implementation of MMT is now under way. The developer’s day will be on July 5th (Saturday), 2014, 10:00 – 17:00 at the Sapporo Convention Center. Therefore, if you don’t know anything about MMT, the developer’s day is certainly a place to be.