The 111th MPEG meeting (note: link includes press release and all publicly available output documents) was held in Geneva, Switzerland showing up some interesting aspects which I’d like to highlight here. Undoubtedly, it was the shortest meeting I’ve ever attended (and my first meeting was #61) as final plenary concluded at 2015/02/20T18:18! 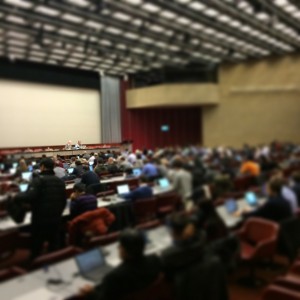 In terms of the requirements (subgroup) it’s worth to mention the call for evidence (CfE) for high-dynamic range (HDR) and wide color gamut (WCG) video coding which comprises a first milestone towards a new video coding format. The purpose of this CfE is to explore whether or not  (a) the coding efficiency and/or (b) the functionality of the HEVC Main 10 and Scalable Main 10 profiles can be significantly improved for HDR and WCG content. In addition to that requirements issues a draft call for evidence on free viewpoint TV. Both documents are publicly available here.

The video subgroup continued discussions related to the future of video coding standardisation and issued a public document requesting contributions on “future video compression technology”. Interesting application requirements come from over-the-top streaming use cases which request HDR and WCG as well as video over cellular networks. Well, at least the former is something to be covered by the CfE mentioned above. Furthermore, features like scalability and perceptual quality is something that should be considered from ground-up and not (only) as an extension. Yes, scalability is something that really helps a lot in OTT streaming starting from easier content management, cache-efficient delivery, and it allows for a more aggressive buffer modelling and, thus, adaptation logic within the client enabling better Quality of Experience (QoE) for the end user. It seems like complexity (at the encoder) is not such much a concern as long as it scales with cloud deployments such as http://www.bitcodin.com/ (e.g., the bitdash demo area shows some neat 4K/8K/HFR DASH demos which have been encoded with bitcodin). Closely related to 8K, there’s a new AVC amendment coming up covering 8K although one can do it already today (see before) but it’s good to have standards support for this. For HEVC, the JCT-3D/VC issued the FDAM4 for 3D Video Extensions and started with PDAM5 for Screen Content Coding Extensions (both documents being publicly available after an editing period of about a month).

And what about audio, the audio subgroup has decided that ISO/IEC DIS 23008-3 3D Audio shall be promoted directly to IS which means that the DIS was already at such a good state that only editorial comments are applied which actually saves a balloting cycle. We have to congratulate the audio subgroup for this remarkable milestone.

Finally, I’d like to discuss a few topics related to DASH which is progressing towards its 3rd edition which will incorporate amendment 2 (Spatial Relationship Description, Generalized URL parameters and other extensions), amendment 3 (Authentication, Access Control and multiple MPDs), and everything else that will be incorporated within this year, like some aspects documented in the technologies under consideration or currently being discussed within the core experiments (CE). Currently, MPEG-DASH conducts 5 core experiments:

The description of core experiments is publicly available and, compared to the previous meeting, we have a new CE which is about content aggregation and playback control (CAPCO) which “explores solutions for aggregation of DASH content from multiple live and on-demand origin servers, addressing applications such as creating customized on-demand and live programs/channels from multiple origin servers per client, targeted preroll ad insertion in live programs and also limiting playback by client such as no-skip or no fast forward.” This process is quite open and anybody can join by subscribing to the email reflector.

The CE for DASH over Full Duplex HTTP-based Protocols (FDH) is becoming major and basically defines the usage of DASH for push-features of WebSockets and HTTP/2. At this meeting MPEG issues a working draft and also the CE on Server and Network Assisted DASH (SAND) got its own part 5 where it goes to CD but documents are not publicly available. However, I’m pretty sure I can report more on this next time, so stay tuned or feel free to comment here.