JPEG has been the most common representation format of digital images for more than 25 years. Other image representation formats have been standardised by JPEG committee like JPEG 2000 or more recently JPEG XS. Furthermore, JPEG has been extended with new functionalities like HDR or alpha plane coding with the JPEG XT standard, and more recently with a reference software. Another solutions have been also proposed by different players with limited success. The JPEG committee decided it is the time to create a new working item, named JPEG XL, that aims to develop an image coding standard with increased quality and flexibility combined with a better compression efficiency. The evaluation of the call for proposals responses had already confirmed the industry interest, and development of core experiments has now begun. Several functionalities will be considered, like support for lossless transcoding of images represented with JPEG standard.

A 2nd workshop on media blockchain technologies was held in Lisbon, collocated with the JPEG meeting. Touradj Ebrahimi and Frederik Temmermans opened the workshop with presentations on relevant JPEG activities such as JPEG Privacy and Security. Thereafter, Zekeriya Erkin made a presentation on blockchain, distributed trust and privacy, and Carlos Serrão presented an overview of the ISO/TC 307 standardization work on blockchain and distributed ledger technologies. The workshop concluded with a panel discussion chaired by Fernando Pereira where the interoperability of blockchain and media technologies was discussed. A 3rd workshop is planned during the 83rd meeting to be held in Geneva, Switzerland on March 20th, 2019.

The 82nd JPEG meeting had the following highlights: 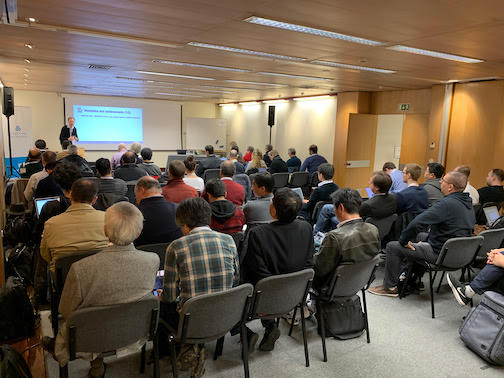 The following summarizes various highlights during JPEG’s Lisbon meeting. As always, JPEG welcomes participation from industry and academia in all its standards activities.

The JPEG Committee launched JPEG XL with the aim of developing a standard for image coding that offers substantially better compression efficiency when compared to existing image formats, along with features desirable for web distribution and efficient compression of high quality images. Subjective tests conducted by two independent research laboratories were presented at the 82nd meeting in Lisbon and indicate promising results that compare favorably with state of the art codecs.

A development software for the JPEG XL verification model is currently being implemented. A series of experiments have been also defined for improving the above model; these experiments address new functionalities such as lossless coding and progressive decoding.

At the Lisbon meeting, Part 2 of JPEG Pleno Light Field was refined and a Committee Draft (CD) text was prepared. A new round of core experiments targets improved subaperture image prediction quality and scalability functionality.

JPEG Pleno Holography will be hosting a workshop on March 19th, 2019 during the 83rd JPEG meeting in Geneva. The purpose of this workshop is to provide insights in the status of holographic applications such as holographic microscopy and tomography, displays and printing, and to assess their impact on the planned standardization specification. This workshop invites participation from both industry and academia experts. Information on the workshop can be find at https://jpeg.org/items/20190228_pleno_holography_workshop_geneva_announcement.html

The JPEG Committee is pleased to announce a new milestone of the JPEG XS project, with the Profiles and Buffer Models (JPEG XS ISO/IEC 21122 Part 2) submitted to ISO for immediate publication as International Standard.

This project aims at standardization of a visually lossless low-latency and lightweight compression scheme that can be used as a mezzanine codec within any AV market. Among the targeted use cases are video transport over professional video links (SDI, IP, Ethernet), real-time video storage, memory buffers, omnidirectional video capture and rendering, and sensor compression (for example in cameras and in the automotive industry). The Core Coding System allows for visually lossless quality at moderate compression rates, scalable end-to-end latency ranging from less than a line to a few lines of the image, and low complexity real time implementations in ASIC, FPGA, CPU and GPU. The new part “Profiles and Buffer Models” defines different coding tools subsets addressing specific application fields and use cases. For more information, interested parties are invited to read the JPEG White paper on JPEG XS that has been recently published on the JPEG website (https://jpeg.org).

The JPEG Committee continues its work on ISO/IEC 15444-15 High-Throughput JPEG 2000 (HTJ2K) with the development of conformance codestreams and reference software, improving interoperability and reducing obstacles to implementation.

At the 82nd JPEG meeting, the Committee DIS ballots were completed, comments reviewed, and the standard progressed towards FDIS text for upcoming ballots on “JPEG Universal Metadata Box Format (JUMBF)” as ISO/IEC 19566-5, and “JPEG 360” as ISO/IEC 19566-6. Investigations continued to generalize the framework to other applications relying on JPEG (ISO/IEC 10918 | ITU-T.81), and JPEG Pleno Light Field.

With the JPEG Reference Software reaching FDIS stage, the JPEG Committee reaches an important milestone by extending its specifications with a new part containing a reference software. With its FDIS release, two implementations will become official reference to the most successful standard of the JPEG Committee: The fast and widely deployed libjpeg-turbo code, along with a complete implementation of JPEG coming from the Committee itself that also covers coding modes that were only known by a few experts.

“One of the strengths of the JPEG Committee has been in its ability to identify important trends in imaging technologies and their impact on products and services. I am delighted to see that this effort still continues and the Committee remains attentive to future.” said Prof. Touradj Ebrahimi, the Convenor of the JPEG Committee.

The JPEG Committee nominally meets four times a year, in different world locations. The 82nd JPEG Meeting was held on 19-25 October 2018, in Lisbon, Portugal. The next 83rd JPEG Meeting will be held on 16-22 March 2019, in Geneva, Switzerland.