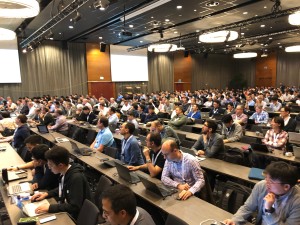 Plenary of the 127th MPEG Meeting in Gothenburg, Sweden.

The 127th MPEG meeting concluded on July 12, 2019 in Gothenburg, Sweden with the following topics:

The corresponding press release of the 127th MPEG meeting can be found here: https://mpeg.chiariglione.org/meetings/127

The development of the next major generation of video coding standard has achieved excellent progress, such that MPEG has approved the Committee Draft (CD, i.e., the text for formal balloting in the ISO/IEC approval process).

The new VVC standard will be applicable to a very broad range of applications and it will also provide additional functionalities. VVC will provide a substantial improvement in coding efficiency relative to existing standards. The improvement in coding efficiency is expected to be quite substantial – e.g., in the range of 35–60% bit rate reduction relative to HEVC although it has not yet been formally measured. Relative to HEVC means for equivalent subjective video quality at picture resolutions such as 1080p HD or 4K or 8K UHD, either for standard dynamic range video or high dynamic range and wide color gamut content for levels of quality appropriate for use in consumer distribution services. The focus during the development of the standard has primarily been on 10-bit 4:2:0 content, and 4:4:4 chroma format will also be supported.

The VVC standard is being developed in the Joint Video Experts Team (JVET), a group established jointly by MPEG and the Video Coding Experts Group (VCEG) of ITU-T Study Group 16. In addition to a text specification, the project also includes the development of reference software, a conformance testing suite, and a new standard ISO/IEC 23002-7 specifying supplemental enhancement information messages for coded video bitstreams. The approval process for ISO/IEC 23002-7 has also begun, with the issuance of a CD consideration ballot.

Research aspects: VVC represents the next generation video codec to be deployed in 2020+ and basically the same research aspects apply as for previous generations, i.e., coding efficiency, performance/complexity, and objective/subjective evaluation. Luckily, JVET documents are freely available including the actual standard (committee draft), software (and its description), and common test conditions. Thus, researcher utilizing these resources are able to conduct reproducible research when contributing their findings and code improvements back to the community at large.

Interestingly, at the same meeting as VVC, MPEG promoted MPEG-5 Essential Video Coding (EVC) to Committee Draft (CD). The goal of MPEG-5 EVC is to provide a standardized video coding solution to address business needs in some use cases, such as video streaming, where existing ISO video coding standards have not been as widely adopted as might be expected from their purely technical characteristics.

The MPEG-5 EVC standards includes a baseline profile that contains only technologies that are over 20 years old or are otherwise expected to be royalty-free. Additionally, a main profile adds a small number of additional tools, each providing significant performance gain. All main profile tools are capable of being individually switched off or individually switched over to a corresponding baseline tool. Organizations making proposals for the main profile have agreed to publish applicable licensing terms within two years of FDIS stage, either individually or as part of a patent pool.

Research aspects: Similar research aspects can be described for EVC and from a software engineering perspective it could be also interesting to further investigate this switching mechanism of individual tools or/and fall back option to baseline tools. Naturally, a comparison with next generation codecs such as VVC is interesting per se. The licensing aspects itself are probably interesting for other disciplines but that is another story…

The Common Media Application Format (CMAF) enables efficient encoding, storage, and delivery of digital media content (incl. audio, video, subtitles among others), which is key to scaling operations to support the rapid growth of video streaming over the internet. The CMAF standard is the result of widespread industry adoption of an application of MPEG technologies for adaptive video streaming over the Internet, and widespread industry participation in the MPEG process to standardize best practices within CMAF.

The 2nd edition of CMAF adds support for a number of specifications that were a result of significant industry interest. Those include

This edition also introduces CMAF supplemental data handling as well as new structural brands for CMAF that reflects the common practice of the significant deployment of CMAF in industry. Companies adopting CMAF technology will find the specifications introduced in the 2nd Edition particularly useful for further adoption and proliferation of CMAF in the market.

The 4th edition of MPEG-DASH comprises the following features:

It is expected that this edition will be published later this year.

Research aspects: CMAF 2nd and DASH 4th edition come along with a rich feature set enabling a plethora of use cases. The underlying principles are still the same and research issues arise from updated application and service requirements with respect to content complexity, time aspects (mainly delay/latency), and quality of experience (QoE). The DASH-IF awards the excellence in DASH award at the ACM Multimedia Systems conference and an overview about its academic efforts can be found here.

At its 127th meeting, MPEG has promoted the carriage of point cloud data to the Committee Draft stage, the first milestone of ISO standard development process. This standard is the first one introducing the support of volumetric media in the industry-famous ISO base media file format family of standards.

This standard supports the carriage of point cloud data comprising individually encoded video bitstreams within multiple file format tracks in order to support the intrinsic nature of the video-based point cloud compression (V-PCC). Additionally, it also allows the carriage of point cloud data in one file format track for applications requiring multiplexed content (i.e., the video bitstream of multiple components is interleaved into one bitstream).

Research aspects: MPEG’s Point Cloud Compression (PCC) comes in two flavors, video- and geometric-based but still requires to be packaged into file and delivery formats. MPEG’s choice here is the ISO base media file format and the efficient carriage of point cloud data is characterized by both functionality (i.e., enabling the required used cases) and performance (such as low overhead).

The introduction of high-throughput DNA sequencing has led to the generation of large quantities of genomic sequencing data that have to be stored, transferred and analyzed. So far WG 11 (MPEG) and ISO TC 276/WG 5 have addressed the representation, compression and transport of genome sequencing data by developing the ISO/IEC 23092 standard series also known as MPEG-G. They provide a file and transport format, compression technology, metadata specifications, protection support, and standard APIs for the access of sequencing data in the native compressed format.

An important element in the effective usage of sequencing data is the association of the data with the results of the analysis and annotations that are generated by processing pipelines and analysts. At the moment such association happens as a separate step, standard and effective ways of linking data and meta information derived from sequencing data are not available.

At its 127th meeting, MPEG and ISO TC 276/WG 5 issued a joint Call for Proposals (CfP) addressing the solution of such problem. The call seeks submissions of technologies that can provide efficient representation and compression solutions for the processing of genomic annotation data.

Companies and organizations are invited to submit proposals in response to this call. Responses are expected to be submitted by the 8th January 2020 and will be evaluated during the 129th WG 11 (MPEG) meeting. Detailed information, including how to respond to the call for proposals, the requirements that have to be considered, and the test data to be used, is reported in the documents N18648, N18647, and N18649 available at the 127th meeting website (http://mpeg.chiariglione.org/meetings/127). For any further question about the call, test conditions, required software or test sequences please contact: Joern Ostermann, MPEG Requirements Group Chair (ostermann@tnt.uni-hannover.de) or Martin Golebiewski, Convenor ISO TC 276/WG 5 (martin.golebiewski@h-its.org).

At its 127th meeting, WG11 (MPEG) promoted the 4th edition of two parts of ISO/IEC 23005 (MPEG-V; Media Context and Control) standards to the Final Draft International Standard (FDIS). The new edition of ISO/IEC 23005-1 (architecture) enables ten new use cases, which can be grouped into four categories: 3D printing, olfactory information in virtual worlds, virtual panoramic vision in car, and adaptive sound handling. The new edition of ISO/IEC 23005-7 (conformance and reference software) is updated to reflect the changes made by the introduction of new tools defined in other parts of ISO/IEC 23005. More information on MPEG-V and its parts 1-7 can be found at https://mpeg.chiariglione.org/standards/mpeg-v.

Finally, the unofficial highlight of the 127th MPEG meeting we certainly found while scanning the scene in Gothenburg on Tuesday night… 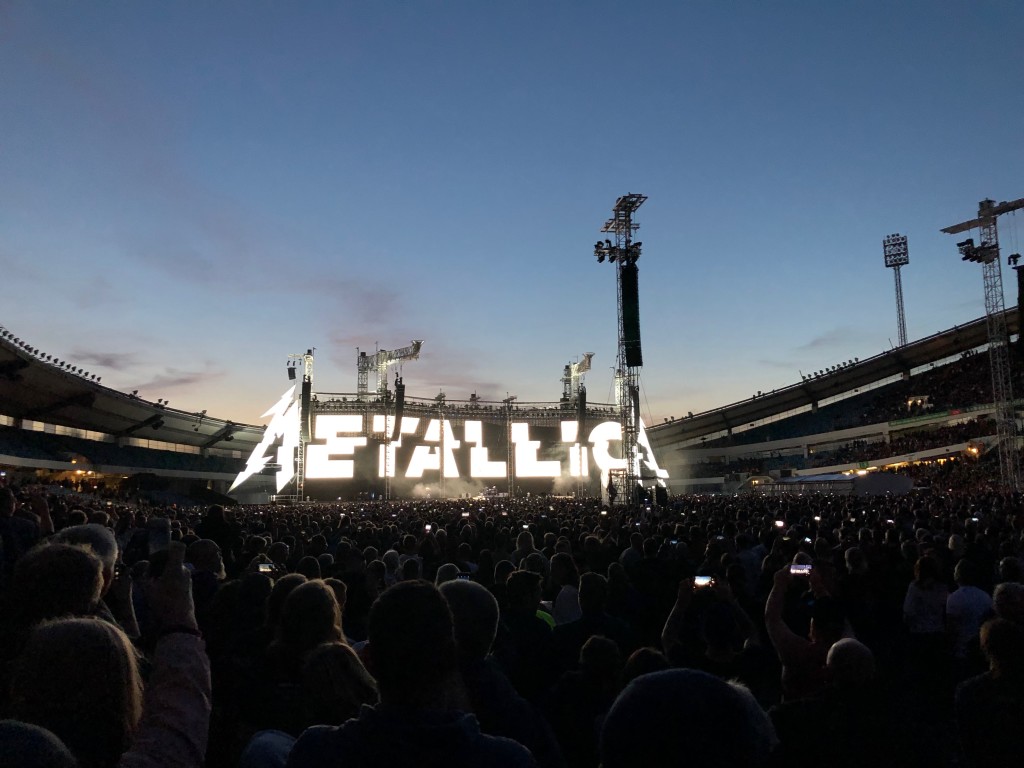