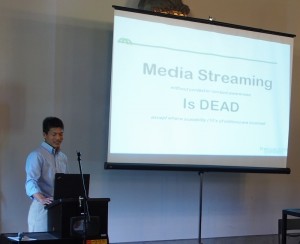 NOSSDAV 2012, the 22nd SIGMM Workshop on Network and Operating Systems Support for Digital Audio and Video, was be held in Toronto, Canada, on June 7-8 2012. As in previous years, the workshop will continue to focus on both established and emerging research topics, high-risk high-return ideas and proposals, and future research directions in multimedia networking and systems, in a single-track format that encourages active participation and discussions among academic and industry researchers and practitioners.

A special focus of NOSSDAV 2012 was given to contributions about the youngest multimedia systems topics. These were identified as system-level support for social media and social networking, improving performance with multi-core and many-core processors, as well as multimedia applications on mobile devices and/or in a cloud computing environment.

A strong new intereste area that was apparent during the workshop was multiview and panoramic video, as well as considerations on regions-of-interest in larger videos. Another push comes from the interaction of video processing and streaming with cloud services.

The first day of the NOSSDAV workshop was Thursday June the 7th. The workshop was held in the Hart House at University of Toronto. 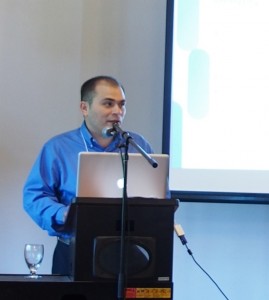 The day started with a keynote by Dr. Ali C. Begen from Cisco Systems, titled “TV Everywhere”. The talk was very interesting, and gave a good overview of the TV Everywhere technologies available for integrating the emerging over-the-top content into a managed network and making premium content accessible for unmanaged devices. In the talk Dr. Begen also provided several real-world use cases of TV Everywhere. It was also sessions on streaming, cloud and middleware support and the first day ended with a session on multi-view and panoramic video.

The second and last day (Friday 8th) the NOSSDAV workshop stared with another keynote, which was held by Professor Wu-chi Feng from Portland State University. The talk was titled “Streaming Media Evolution: Where to now?”. The keynote addressed Professor Feng’s perspective on the history and evolution of streaming media and lessons learnt. After the keynote it was sessions on streaming, content sharing and video compression. It was also a panel discussion on NOSSDAV.

The Panel Discussion at NOSSDAV 2012 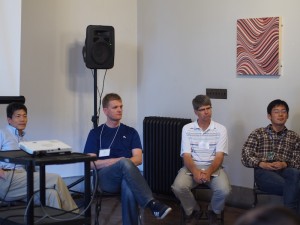 In the panel was Pål Halvorsen from University of Oslo, Wu-chi Feng from Portland State University, Yan Huang from Tencent Inc. and Tim Brecht from University of Waterloo. The topic of the panel was the future of media streaming, and it was a very interesting discussion. One of the panelists even boldly claimed that media streaming research is dead… The workshop ended on Friday with a presentation of next year’s NOSSDAV workshop which will be held Oslo together with MMSys and MoVid.