ACM is the professional society of computer scientists, and SIGMM is the special interest group on multimedia 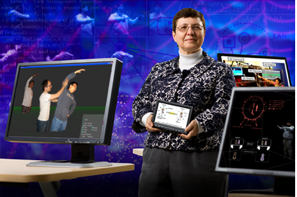 Klara Nahrstedt is a leading researcher in multimedia systems. She has made seminal contributions in QoS management for distributed multimedia systems. Her pioneering work on QoS brokerage with QoS translation, QoS negotiation and QoS adaptation services set between application and transport layers to enable end-to-end QoS contract changed the way multimedia end-system architectures are designed and built. This result was published as the “QoS Broker” in 1995. Her novel QoS adaptation extended this work by modeling the end-to-end QoS problem based on a control-theoretical approach. This work gained wide recognition as the first usage of control theory in multimedia systems and received the Leonard C. Abraham Paper Award from the IEEE Communication Society.

Addressing the end-to-end QoS management problem, she made fundamental contributions to QoS routing. In her 1999 JSAC paper “Distributed Quality of Service Routing in Ad-hoc Networks” she derived a  distributed time and  bandwidth  sensitive  routing  scheme  for a dynamic multi-hop mobile environment. Her IEEE Network Magazine paper, “An Overview of Quality-of-Service Routing for the Next Generation High-Speed Networks: Problems and Solutions” received the “Best Tutorial Paper” Award from the IEEE Communication Society in 1999 and is still highly relevant today.

She has made seminal contributions to multimedia wireless networks.  Her novel  pricing  scheme  for  ad  hoc  networks using pricing for a clique of nodes that interfere with each other, as opposed to the per connection pricing as it was done in wired networks, as well as her results on cross-layer QoS approaches, including bandwidth and delay management, found a wide acceptance and acknowledgement in industry.

She leads the 3D tele-immersive systems and networking field. She was the first one to develop a multi-view 3D video adaptation framework for bandwidth management and view-casting protocols for multi-view 3D video. She has developed new metrics for 3D immersive video and the first comprehensive framework based on sound theoretical underpinnings for Quality of Experience in Distributed Interactive Multimedia Environments. This work was awarded Best Student Paper Award at the premier SIGMM conference, ACM Multimedia 2011, and her PhD student received the SIGMM 2012 Best PhD Thesis Award as a result.

Prof. Nahrstedt’s research leadership has translated into several awards including the 2009 Humboldt Fellow Research Award, the 2012 IEEE Computer Society Technical Achievement Award, the 2013 ACM Fellow recognition and the 2014 induction into the German National Academy of Sciences.

In summary, Prof. Nahrstedt’s accomplishments include her pioneering and extraordinary contributions in quality of service for multimedia systems and networking and her visionary leadership of the computing community.

The award will be presented on November 5th 2014 at the ACM Multimedia Conference in Orlando, Florida.