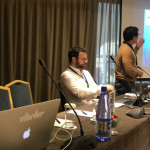 MediaEval is a benchmarking initiative that offers challenges in multimedia retrieval, analysis and exploration. The tasks offered by MediaEval concentrate specifically on the human and social aspects of multimedia. They encourage researchers to bring together multiple modalities (visual, text, audio) and to think in terms of systems that serve users. Our larger aim is to promote reproducible research that makes multimedia a positive force for society. In order to provide an impression of the topical scope of MediaEval, we describe a few examples of typical tasks.

Historically, MediaEval tasks have often involved social media analysis. One of the first tasks offered by MediaEval, called the “Placing” Task, focused on the geo-location of social multimedia. This task ran from 2010-2016 and studied the challenge of automatically predicting the location at which an image has been taken. Over the years, the task investigated the benefits of combining text and image features, and also explored the challenges involved with geo-location prediction of video.

The “Placing” Task gave rise to two daughter tasks, which are focused on the societal impact of technology that can automatically predict the geo-location of multimedia shared online. One is Flood-related Multimedia, which challenges researchers to extract information related to flooding disasters from social media posts (combining text and images). The other is Pixel Privacy, which allows researchers to explore ways in which adversarial images can be used to protect sensitive information from being automatically extracted from images shared online.

MediaEval has also offered a number of tasks that focus on how media content is received by users. The interest of MediaEval in the emotional impact of music is currently continued by the Emotion and Theme Recognition in Music Task. Also, the Predicting Media Memorability Task explores the aspects of video that are memorable to users.

Recently, MediaEval has widened its focus to include multimedia analysis in systems. The Sports Video Annotation Task works towards improving sports training systems and the Medico Task focuses on multimedia analysis for more effective and efficient medical diagnosis.

Recent years have seen the rise of the use of sensor data in MediaEval. The No-audio Multimodal Speech Detection Task uses a unique data set captured by people wearing sensors and having conversations in a social setting. In addition to the sensor data, the movement of the speakers is captured by an overhead camera. The challenge is to detect the moments at which the people are speaking without making use of audio recordings.

The Insight for Wellbeing Task uses a data set of lifelog images, sensor data and tags captured by people walking through a city wearing sensors and using smartphones. The challenge is to relate the data that is captured to the local pollution conditions.

Each year, MediaEval holds a workshop that brings researchers together to share their findings, discuss, and plan next year’s tasks. The 2019 workshop marked the 10th anniversary of MediaEval, which became an independent benchmark in 2010. The MediaEval 2019 Workshop was hosted by EURECOM in Sophia Antipolis, France. The workshop took place 27-29 October 2020, right after ACM Multimedia 2019, in Nice, France.

The MediaEval 2019 Workshop is grateful to SIGMM for their support. This support contributed to helping ten students to attend the workshop, across a variety of tasks and also made it possible to record all of the workshop talks. We also gratefully acknowledge the Multimedia Computing Group at Delft University of Technology and EURECOM.

Links to MediaEval 2019 tasks, videos and slides are available on the MediaEval 2019 homepage http://multimediaeval.org/mediaeval2019/. The link to the 2019 proceedings can be found there as well.

MediaEval has compiled a bibliography of papers that have been published using MediaEval data sets. This list includes not only MediaEval workshop papers, but also papers published at other workshops, conferences, and in journals. In total, around 750 papers have been written that use MediaEval data, and this number continues to grow. Check out the bibliography at https://multimediaeval.github.io/bib.

The Medieval in MediaEval

A long-standing tradition in MediaEval is to incorporate some aspect of medieval history into the social event of the workshop. This tradition is a wordplay on our name (“mediaeval” is an older spelling of “medieval”). Through the years the medieval connection has served to provide a local context for the workshop and has strengthened the bond among participants. At the MediaEval 2019 Workshop, we offered the chance to take a nature walk to the medieval town of Biot.

The walking participants and the participants taking the bus convened on the “Place des Arcades” in the medieval town of Biot, where we enjoyed a dinner together under historic arches.

MediaEval has just announced the task line-up for 2020. Registration will open in July 2020 and the runs will be due at the end of October 2020. The workshop will be held in December, with dates to be announced.

This year, the MediaEval workshop will be fully online. Since the MediaEval 2017 in Dublin, MediaEval has offered the possibility for remote workshop participation. Holding the workshop online this year is a natural extension of this trend, and we hope that researchers around the globe will take advantage of the opportunity to participate.

We are happy to introduce the new website: https://multimediaeval.github.io/. More information will be posted there as the season moves forward.