Christian Timmerer an assistant professor in the Department of Information Technology (ITEC), Multimedia Communication Group (MMC), Klagenfurt University, Austria. He has participated in ISO/MPEG work for several years, notably in the area of MPEG-21, MPEG-M, and MPEG-V.

MPEG news: a report from the 100th meeting, Geneva, CH

The official press release is available here and I’d like to highlight two topics from MPEGs’ 100th meeting in Geneva, Switzerland: 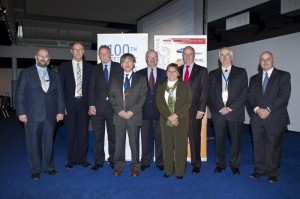 The 100th MPEG meeting was held in Geneva, Switzerland with a sponsored social event including honorific speeches by representatives of ISO, IEC, ITU-T, WIPO, JTC 1, SC 29, Sisvel, Samsung, and MERL. The ISO press release can be found here highlighting the win of three “Technology and Engineering Emmy Awards presented by the U.S. National Academy of Television Arts & Sciences (NATAS) for outstanding achievement in engineering and technical development.

Some additional pictures can be found here.

ISOBMFF 4th edition: The “Text of ISO/IEC 14496-12 4th edition” has been approved which means the the ISO base media file format is available in its fourth edition (i.e., a consolidation of Amd.1, Amd.2, Amd.3, Cor.1-5). As previous editions, it shall become publicly available via ITTF Web site.

MDS social metadata: The fourth amendment of MPEG-7 MDS has been approved providing support for social metadata such as ratings (like, 5-star) based on media, identity, and quality.

DASH conference/reference software: The committee draft for ISO/IEC 23009-2 has been approved adding conformance and reference software to DASH. In particular, MPD and segment conformance rules are defined and bitstreams are available. Furthermore, libdash has been selected as sample client. A public online MPD validator is available at http://dash.itec.aau.at.

WebVC: The committee draft of MPEG-4 Part 29 aka Web Video Coding (WebVC) has been approved which is compatible with the Constrained Baseline Profile of ISO/IEC 14996-10. In fact, WebVC is derived from the AVC specification with the purpose to define a coding format suitable for the Web. The CD is publicly available here.

ARAF: MPEG addresses the need for standards in the area of augmented realities by defining an application format. Hence, ARAF stands for Augmented Reality Application Format and will be defined as Part 13 of MPEG-A. The committee draft is publicly available here addressing use cases and requirements.

N12475 is the Report on preliminary subjective testing of HEVC compression capability which can be found here. It shows impressive results as reported elsewhere, e.g., here. In particular, > 50% bitrate reduction, 67% in class B (HDTV), 49% in class C (WVGA) => mission accomplished! Currently, HEVC is between ballots and FDIS/IS is expected around Jan-Apr 2013.