For this edition of the Opinion Column, happening in correspondence with ACM Multimedia 2018, we launched a short community survey regarding their perception of the conference. We prepared the survey together with senior members of the community, as well as the organizers of ACM Multimedia 2019. You can find the full survey here.

Overall, we collected 52 responses. The participant sample was slightly skewed towards more senior members of the community: around 70% described themselves are full, associate or assistant professors. Almost 20% were research scientists from industry. Half of the participants were long-term contributors of the conference, having attended more than 6 editions of ACM MM, however only around a quarter of the participants had attended the last edition of MM in Seoul, Korea.

First, we asked participants to describe what ACM Multimedia means for them, using 3 words. We aggregated the responses in the word cloud below. Bigger words correspond to words with higher frequency. Most participants associated MM with prestigious and high quality content, and with high diversity of topics and modalities. While recognizing its prestige, some respondents showed their interest in a modernization of the MM focus.

Next, we asked respondents “What brings you to ACM Multimedia?”, and provided a set of pre-defined options including “presenting my research”, “networking”, “community building”,  “ACM MM is at the core of my scientific interests” and “other” (free text). 1 on 5 participants selected all options as relevant to their motivation behind attending Multimedia. The large majority of participants (65%) declare to attend ACM Multimedia to present research and do networking. By inspecting the free-text answers in the “other” option, we found that some people were interested in specific tracks, and that others see MM as a good opportunity to showcase research to their graduate students.

The next question was about paper submission. We wanted to characterize what pushes researchers to submit to ACM multimedia. We prepared 3 different statements capturing different dimensions of analysis, and asked participants to rate them on a 5-point scale, from “Strongly disagree” (1), to “Strongly agree” (5).

The distribution of agreement for each question is shown in the plot below. Participants tend to neither disagree nor agree about Multimedia as the only possible venue for their papers (average agreement score 2.9); they generally disagreed with the statement “I consider ACM Multimedia mostly to resubmit papers rejected from other venues” (average score 2.0), and strongly agreed on the idea of MM as a premier conference (average score 4.2). 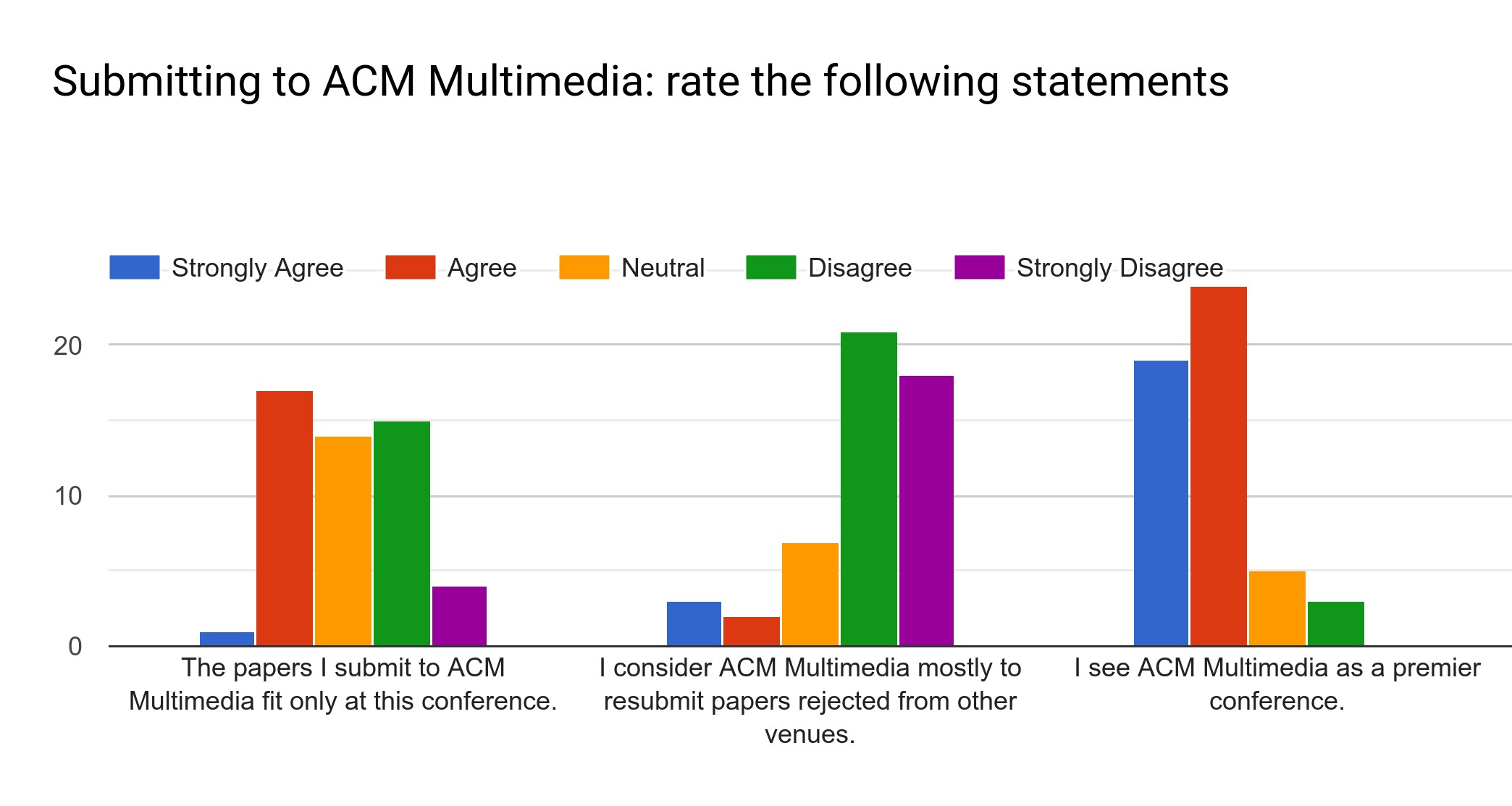 One of the goals of this survey was to help the future Program Chairs of MM 2019 understand the extent to which participants agree with the reviewers’ guidelines that will be introduced in the next edition of the conference. To this end, we invited respondents to express their agreement with a fundamental point of these guidelines: “Remember that the problem [..] is expected to involve more than a single modality, or [..] how people interpret and use multimedia. Papers that address a single modality only and also fail to contribute new knowledge on human use of multimedia must be rejected as out of scope for the conference”.  Around 60% agreed or strongly agreed with this statement, while slightly more than 25% disagreed or strongly disagreed. The remaining 15% had no opinion about the statement.

We also asked participants to share with us any further comment regarding this last question or ACM MM in general. People generally approved the introduction of these reviewing guidelines, and the idea of multiple modalities and human perception and applications of multimedia. Some suggested that, given the re-focusing implied by this new reviewing guidelines, the instructions should be made more specific i.e. chairs should clarify the definition of “involve”: how multimodal should the paper be?

Others encouraged to clarify even further the broader scope of ACM Multimedia, defining its position with respect to other multimedia conferences (MMsys, MMM), but also with computer vision conferences such as CVPR/ECCV (and avoid conference dates overlapping).

Some comments proposed to rate papers based on the impact on the community, and on the level of innovation even in  a single modality, as forcing multiple modalities could “alienate” community members.

Beyond reviewing guidelines, a major theme emerging from the free-text comments was about diversity in ACM Multimedia. Several participants called for more geographic diversity in participants and paper authors. Some also noted that more turn-over in the organizing committees should be encouraged. Finally, most participants brought up the need for more balance in MM topics: it was brought up that, while most accepted papers are under the general umbrella of “Multimedia Content Understanding”, MM should encourage in the future more paper about systems, arts, and other emerging topics.

With this bottom-up survey analysis, we aimed to give voice to the major themes that the multimedia community cares about, and hope to continue doing so in the future editions of this column. We would like to thank all researchers and community members who gave their contribution by shaping and filling this survey, and allowed us to get a broader picture of the community perception of ACM MM!