The original blog post can be found at the Bitmovin Techblog and has been updated here to focus on and highlight research aspects. 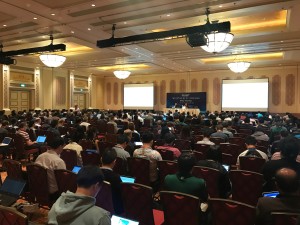 At its 120th meeting, MPEG analysed the technologies submitted by nine industry leaders as responses to the Call for Proposals (CfP) for Point Cloud Compression (PCC). These technologies address the lossless or lossy coding of 3D point clouds with associated attributes such as colour and material properties. Point clouds are referred to as unordered sets of points in a 3D space and typically captured using various setups of multiple cameras, depth sensors, LiDAR scanners, etc., but can also be generated synthetically and are in use in several industries. They have recently emerged as representations of the real world enabling immersive forms of interaction, navigation, and communication. Point clouds are typically represented by extremely large amounts of data providing a significant barrier for mass market applications. Thus, MPEG has issued a Call for Proposal seeking technologies that allow reduction of point cloud data for its intended applications. After a formal objective and subjective evaluation campaign, MPEG selected three technologies as starting points for the test models for static, animated, and dynamically acquired point clouds. A key conclusion of the evaluation was that state-of-the-art point cloud compression can be significantly improved by leveraging decades of 2D video coding tools and combining 2D and 3D compression technologies. Such an approach provides synergies with existing hardware and software infrastructures for rapid deployment of new immersive experiences.

Although the initial selection of technologies for point cloud compression has been concluded at the 120th MPEG meeting, it could be also seen as a kick-off for its scientific evaluation and various further developments including the optimization thereof. It is expected that various scientific conference will focus on point cloud compression and may open calls for grand challenges like for example at IEEE ICME 2018.

The understanding of the virtual reality (VR) potential is growing but market fragmentation caused by the lack of interoperable formats for the storage and delivery of such content stifles VR’s market potential. MPEG’s recently started project referred to as Omnidirectional Media Format (OMAF) has reached Final Draft of International Standard (FDIS) at its 120th meeting. It includes

MPEG has defined a format comprising a minimal set of tools to enable interoperability among implementers of the standard. Various aspects are deliberately excluded from the normative parts to foster innovation leading to novel products and services. This enables us — researcher and practitioners — to experiment with these new formats in various ways and focus on informative aspects where typically competition can be found. For example, efficient means for encoding and packaging of omnidirectional/360-degree media content and its adaptive streaming including support for (ultra-)low latency will become a big issue in the near future.

The availability of high throughput DNA sequencing technologies opens new perspectives in the treatment of several diseases making possible the introduction of new global approaches in public health known as “precision medicine”. While routine DNA sequencing in the doctor’s office is still not current practice, medical centers have begun to use sequencing to identify cancer and other diseases and to find effective treatments. As DNA sequencing technologies produce extremely large amounts of data and related information, the ICT costs of storage, transmission, and processing are also very high. The MPEG-G standard addresses and solves the problem of efficient and economical handling of genomic data by providing new

which reached Committee Draft level at its 120th meeting.

Additionally, the Committee Drafts for

are scheduled for the next MPEG meeting and the goal is to publish Draft International Standards (DIS) at the end of 2018.

This new type of (media) content, which requires compression and transport technologies, is emerging within the multimedia community at large and, thus, input is welcome.

The 120th MPEG meeting marked the first major step toward the next generation of video coding standard in the form of a joint Call for Proposals (CfP) with ITU-T SG16’s VCEG. After two years of collaborative informal exploration studies and a gathering of evidence that successfully concluded at the 118th MPEG meeting, MPEG and ITU-T SG16 agreed to issue the CfP for future video coding technology with compression capabilities that significantly exceed those of the HEVC standard and its current extensions. They also formalized an agreement on formation of a joint collaborative team called the “Joint Video Experts Team” (JVET) to work on development of the new planned standard, pending the outcome of the CfP that will be evaluated at the 122nd MPEG meeting in April 2018. To evaluate the proposed compression technologies, formal subjective tests will be performed using video material submitted by proponents in February 2018. The CfP includes the testing of technology for 360° omnidirectional video coding and the coding of content with high-dynamic range and wide colour gamut in addition to conventional standard-dynamic-range camera content. Anticipating a strong response to the call, a “test model” draft design is expected be selected in 2018, with development of a potential new standard in late 2020.

The major goal of a new video coding standard is to be better than its successor (HEVC). Typically this “better” is quantified by 50% which means, that it should be possible encode the video at the same quality with half of the bitrate or a significantly higher quality with the same bitrate including. However, at this time the “Joint Video Experts Team” (JVET) from MPEG and ITU-T SG16 faces competition from the Alliance for Open Media, which is working on AV1. In any case, we are looking forward to an exciting time frame from now until this new codec is ratified and how it will perform compared to AV1. Multimedia systems and applications will also benefit from new codecs which will gain traction as soon as first implementations of this new codec becomes available (note that AV1 is available as open source already and continuously further developed).

MPEG has approved the Final Draft Amendment (FDAM) to MPEG Media Transport (MMT; ISO/IEC 23008-1:2017), which is referred to as “MMT enhancements for mobile environments”. In order to reflect industry needs on MMT, which has been well adopted by broadcast standards such as ATSC 3.0 and Super Hi-Vision, it addresses several important issues on the efficient use of MMT in mobile environments. For example, it adds distributed resource identification message to facilitate multipath delivery and transition request message to change the delivery path of an active session. This amendment also introduces the concept of a MMT-aware network entity (MANE), which might be placed between the original server and the client, and provides a detailed description about how to use it for both improving efficiency and reducing delay of delivery. Additionally, this amendment provides a method to use WebSockets to setup and control an MMT session/presentation.

A new standard for video coding suitable for the internet as well as other video applications, was completed at the 120th MPEG meeting. The Internet Video Coding (IVC) standard was developed with the intention of providing the industry with an “Option 1” video coding standard. In ISO/IEC language, this refers to a standard for which patent holders have declared a willingness to grant licenses free of charge to an unrestricted number of applicants for all necessary patents on a worldwide, non-discriminatory basis and under other reasonable terms and conditions, to enable others to make, use, and sell implementations of the standard. At the time of completion of the IVC standard, the specification contained no identified necessary patent rights except those available under Option 1 licensing terms. During the development of IVC, MPEG removed from the draft standard any necessary patent rights that it was informed were not available under such Option 1 terms, and MPEG is optimistic of the outlook for the new standard. MPEG encourages interested parties to provide information about any other similar cases. The IVC standard has roughly similar compression capability as the earlier AVC standard, which has become the most widely deployed video coding technology in the world. Tests have been conducted to verify IVC’s strong technical capability, and the new standard has also been shown to have relatively modest implementation complexity requirements.

Following a “Call for Evidence” (CfE) issued by MPEG in July 2017, evidence was evaluated at the 120th MPEG meeting to investigate whether video transcoding technology has been developed for transcoding assisted by side data streams that is capable of significantly reducing the computational complexity without reducing compression efficiency. The evaluations of the four responses received included comparisons of the technology against adaptive bit-rate streaming using simulcast as well as against traditional transcoding using full video re-encoding. The responses span the compression efficiency space between simulcast and full transcoding, with trade-offs between the bit rate required for distribution within the network and the bit rate required for delivery to the user. All four responses provided a substantial computational complexity reduction compared to transcoding using full re-encoding. MPEG plans to further investigate transcoding technology and is soliciting expressions of interest from industry on the need for standardization of such assisted transcoding using side data streams.

MPEG currently works on two related topics which are referred to as network-distributed video coding (NDVC) and network-based media processing (NBMP). Both activities involve the network, which is more and more evolving to highly distributed compute and delivery platform as opposed to a bit pipe, which is supposed to deliver data as fast as possible from A to B. This phenomena could be also interesting when looking at developments around 5G, which is actually much more than just radio access technology. These activities are certainly worth to monitor as it basically contributes in order to make networked media resources accessible or even programmable. In this context, I would like to refer the interested reader to the December’17 theme of the IEEE Computer Society Computing Now, which is about Advancing Multimedia Content Distribution.

Publicly available documents from the 120th MPEG meeting can be found here (scroll down to the end of the page). The next MPEG meeting will be held in Gwangju, Korea, January 22-26, 2018. Feel free to contact Christian Timmerer for any questions or comments.

Some of the activities reported above are considered within the Call for Papers at 23rd Packet Video Workshop (PV 2018) co-located with ACM MMSys 2018 in Amsterdam, The Netherlands. Topics of interest include (but are not limited to):