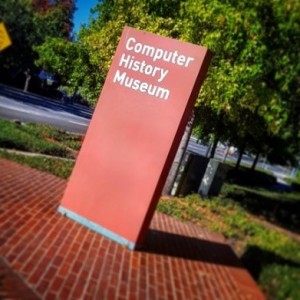 My name is Conor Keighrey, I’m a PhD. candidate at the Athlone Institute Technology in Athlone, Co. Westmeath, Ireland.  The focus of my research is to understand the key influencing factors that affect Quality of Experience (QoE) in emerging immersive multimedia experiences, with a specific focus on applications in the speech and language therapy domain. I am funded for this research by the Irish Research Council Government of Ireland Postgraduate Scholarship Programme. I’m delighted to have been asked to present this report to the SIGMM community as a result of my social media activity at ACM Multimedia Conference.

Launched in 1993, the ACM Multimedia (ACMMM) Conference held its 25th anniversary event in the Mountain View, California. The conference was located in the heart of Silicon Valley, at the inspirational Computer History Museum.

Under five focal themes, the conference called for multimedia papers which focused on topics relating to multimedia: Experience, Systems and Applications, Understanding, Novel Topics, and Engagement.

Keynote addresses were delivered by high-profile industry leading experts from the field of multimedia. These talks provided insight into the active development from the following experts:

Some keynote highlights include Bill Dally’s talk on “Efficient Methods and Hardware for Deep Learning”. Bill provided insight into the work NVidia are doing with neural networks, the hardware which drives them, and the techniques the company are using to make them more efficient. He also highlighted how AI should not be thought of as a mechanism which replaces, but empower humans, thus allowing us to explore more intellectual activities.

Danny Lange of Unity Technologies discussed the application of the Unity game engine to create scenarios in which machine learning models can be trained. His presentation entitled “Bringing Gaming, VR, and AR to Life with Deep Learning” described the capture of data for self-driving cars to prepare for unexpected occurrences in the real world (e.g. pedestrians activity or other cars behaving in unpredicted ways).

A number of the Keynotes were captured by FXPAL (an ACMMM Platinum Sponsor) and are available here.

With an acceptance rate of 27.63% (684 reviewed, 189 accepted), the main track at ACMMM showcased a diverse collection of research from academic institutes around the globe. An abundance of work was presented in the ever-expanding area of deep/machine learning, virtual/augmented/mixed realities, and the traditional multimedia field. 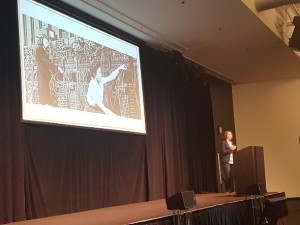 The importance of gender equality and diversity with respect to advancing careers of women in STEM has never been greater. Sponsored by SIGMM, the Women/Diversity in MM lunch took place on the first day of ACMMM. Speakers such as Prof. Noel O’Conner discussed the significance of initiatives such as Athena SWAN (Scientific Women’s Academic Network) within Dublin City University (DCU). Katherine Breeden (Pictured left), an Assistant Professor in the Department of Computer Science at Harvey Mudd College (HMC), presented a fantastic talk on gender balance at HMC. Katherine’s discussion highlighted the key changes which have occurred resulting in more women than men graduating with a degree in computer science at the college.

Other highlights from day 1 include a paper presented at the Experience 2 (Perceptual, Affect, and Interaction) session, chaired by Susanne Boll (University of Oldenburg). Researchers from the National University of Singapore presented the results of a multisensory virtual cocktail (Vocktail) experience which was well received. 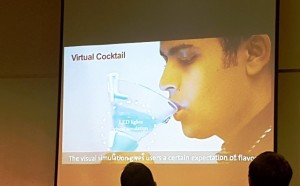 Through the stimulation of 3 sensory modalities, Vocktails aim to create virtual flavor, and augment taste experiences through a customizable interactive drinking utensil. Controlled by a mobile device, participants of the study experienced augmented taste (electrical stimulation of the tongue), smell (micro air-pumps), and visual (RGB light projected onto the liquid) stimulus as they used the system. For more information, check out their paper entitled “Vocktail: A Virtual Cocktail for Pairing Digital Taste, Smell, and Color Sensations” on the ACM Digital Library.

Day 3 of the conference included a session entitled Brave New Ideas. The session presented a fantastic variety of work which focused on the use of multimedia technologies to enhance or create intelligent systems. Demonstrating AI as an assistive tool and winning the Best Brave New Idea Paper award, a paper entitled “Harnessing A.I. for Augmenting Creativity: Application to Movie Trailer Creation” (ACM Digital Library) describes the first-ever human machine collaboration for creating a real movie trailer. Through multi-modal semantic extraction, inclusive of audio-visual, scene analysis, and a statistical approach, key moments which characterize horror films were defined. As a result of this, the AI selected 10 scenes from a feature length film which were further developed alongside a professional film maker to finalize an exciting movie trailer. Officially released by 20th Century Fox, the complete AI trailer for the horror movie “Morgan” can be viewed here.

A new addition to the last ACMMM edition year has been the inclusion of thematic workshops. Four individual workshops (as outlined below) provided opportunity for papers which could not be accommodated within the main track to be presented to the multimedia research community. A total of 495 papers were reviewed from which 64 were accepted (12.93%). Authors of accepted papers presented their work via on-stage thematic workshop pitches, which were followed by poster presentations on Monday the 23rd and Friday the 27th. The workshop themes were as follows:

Presented as part of the thematic workshop pitches, one of the most fascinating demos at the conference was a body of work carried out by Audrey Ziwei Hu (University of Toronto). Her paper entitled “Liquid Jets as Logic-Computing Fluid-User-Interfaces” describes a fluid (water) user interface which is presented as a logic-computing device. Water jets form a medium for tactile interaction and control to create a musical instrument known as a hydraulophone. 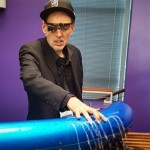 Steve Mann (Pictured left) from Stanford University, who is regarded as “The Father of Wearable Computing”, provided a fantastic live demonstration of the device. The full paper can be found on the ACM Digital Library, and a live demo can be seen here.

In large scale events such ACMMM, the importance of social media reporting/interaction has never been greater. More than 250 social media interactions (tweets, retweets, and likes) were monitored using the #SIGMM and #ACMMM hashtags, as outlined by the SIGMM Records prior to the event. Descriptive (and multimedia enhanced) social media reports provide a chance for those who encounter an unavoidable schedule overlap, and an opportunity to gather some insight into alternative works presented at the conference.

From my own perspective (as a PhD. student), the most important aspect of social media interaction is that reports often serve as a conversational piece. Developing a social presence throughout the many coffee breaks and social events during the conference is key to the success of building a network of contacts within any community. As a newcomer this can often be a daunting task, recognition of other social media reporters offers the perfect ice-breaker, providing opportunity to discuss and inform each other of the on-going work within the multimedia community. As a result of my own online reporting, I was recognized numerous times throughout the conference. Staying active on social media often leads to the development of a research audience, and social media presence among peers. Engaging in such an audience is key to the success of those who wish to follow a path in academia/research.

Building on my own personal experience, continued attendance to SIGMM conferences (irrespective of paper submission) has so many advantages. While the predominant role of a conference is to disseminate work, the informative aspect of attending such events is often overlooked. The area of multimedia research is moving at a fast pace, and thus having the opportunity to engage directly with researchers in your field of expertise is of upmost importance. Attendance to ACMMM and other SIGMM conferences, such ACM Multimedia Systems, has inspired me to explore alternative methodologies within my own respective research. Without a doubt, continued attendance will inspire my research as I move forward.

ACM Multimedia ‘18 (October 22nd – 26th) – The diverse landscape of modern skyscrapers mixed with traditional Buddhist temples, and palaces that is Seoul, South Korea, will be host to the 26th Annual ACMMM. The 2018 event will without a doubt present a variety of work from the multimedia research community. Regular paper abstracts are due on the 30th of March (Full manuscripts are due on the 8th of April). For more information on next year’s ACM Multimedia conference check out the following link: http://www.acmmm.org/2018