The 80th JPEG meeting was held in Berlin, Germany, from 7 to 13 July 2018. During this meeting, JPEG issued a record number of ballots and output documents, spread through the multiple activities taking place. These record numbers are very revealing of the level of commitment of JPEG standardisation committee. A strong effort is being accomplished on the standardisation of new solutions for the emerging image technologies enabling the interoperability of different systems on the growing market of multimedia. Moreover, it is intended that these new initiatives should provide royalty-free patent licensing solutions at least in one of the available profiles, which shall promote a wider adoption of these future JPEG standards from the consumer market, and applications and systems developers.

A significant progress in low latency and high throughput standardisation initiatives has taken place at Berlin meetings. The new part 15 of JPEG 2000, known as High Throughput JPEG 2000 (HTJ2K), is finally ready and reached committee draft status. Furthermore, JPEG XS profiles and levels were released for their second and final ballot. Hence, these new low complexity standards foresee to be finalised in a short time, providing new solutions for developers and consumers on applications where mobility is important and large bandwidth is available. Virtual and augmented reality, as well as 360º images and video, are among the several applications that might benefit from these new standards. 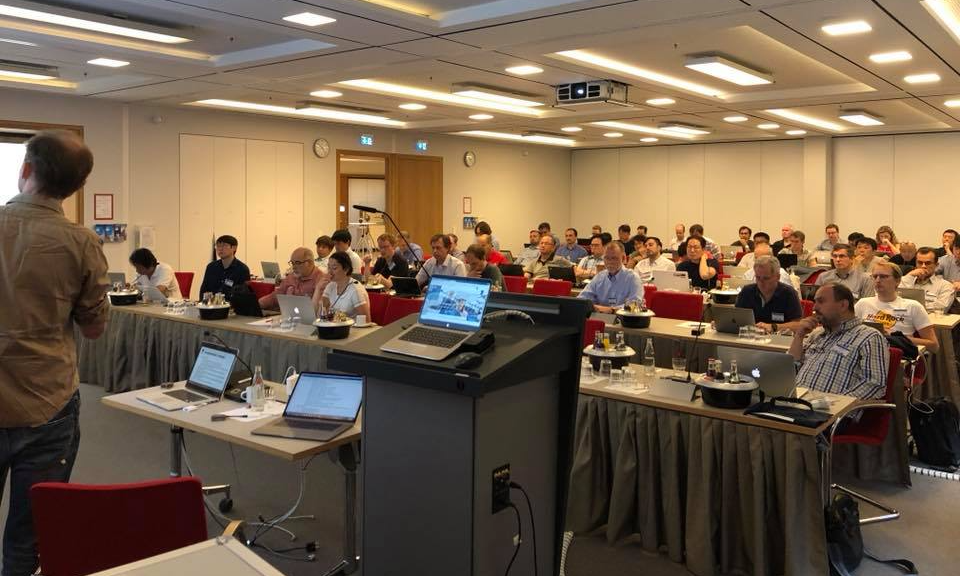 The 80th JPEG meeting had the following highlights:

The following summarizes the various highlights during JPEG’s Berlin meeting.

HTJ2K introduces a new FAST block coder to the JPEG 2000 family. The FAST block coder can be used in place of the JPEG 2000 Part 1 arithmetic block coder, and, as illustrated in Table 1, offers in average an order of magnitude increase on decoding and encoding throughput – at the expense of slightly reduced coding efficiency and elimination of quality scalability.

This project aims at the standardization of a visually lossless low-latency and lightweight compression scheme that can be used as a mezzanine codec for the broadcast industry, Pro-AV and other markets. Targeted use cases are video transport over professional video links (SDI, IP, Ethernet), real-time video storage, memory buffers, omnidirectional video capture and rendering, and sensor compression (in particular in the automotive industry). The Core Coding System, expected to be published in Q4 2018 allows for visually lossless quality at 6:1 compression ratio for most content, 32 lines end-to-end latency, and ultra low complexity implementations in ASIC, FPGA, CPU and GPU. Following the 80th JPEG meeting in Berlin, profiles and levels (addressing specific application fields and use cases) are now under final ballot (expected publication in Q1 2019). Different means to store and transport JPEG XS codestreams in files, over IP networks or SDI infrastructures are also defined and go to a first ballot.

The JPEG Committee issued a Call for Proposals (CfP) following its 79th meeting (April 2018), with the objective of seeking technologies that fulfill the objectives and scope of the Next-Generation Image Coding activity. The CfP, with all related info, can be found in https://jpeg.org/downloads/jpegxl/jpegxl-cfp.pdf. The deadline for expression of interest and registration was August 15, 2018, and submissions to the CfP were due on September 1, 2018.

As outcome of the 80th JPEG meeting in Berlin, a document was produced containing additional information related to the objective and subjective quality assessment methodologies that will be used to evaluate the anchors and proposals to the CfP, available on https://jpeg.org/downloads/jpegxl/wg1n80024-additional-information-cfp.pdf. Moreover, a detailed workflow is described, together with the software and command lines used to generate the anchors and to compute objective quality metrics.

To stay posted on the action plan of JPEG XL, please regularly consult our website at jpeg.org and/or subscribe to its e-mail reflector.

The JPEG Committee progressed towards a common framework and definition for metadata which will improve the ability to share 360 images. At the 80th meeting, the Committee Draft ballot was completed, the comments reviewed, and is now progressing towards DIS text for upcoming ballots on “JPEG Universal Metadata Box Format (JUMBF)” as ISO/IEC 19566-5, and “JPEG 360” as ISO/IEC 19566-6. Investigations have started to apply the framework on the structure of JPEG Pleno files.

The JPEG Committee made significant progress towards standardizing how JPEG XR, JPEG 2000 and the upcoming JPEG XS will be carried in ISO/IEC 23008-12 image file container.

Fake news, copyright violation, media forensics, privacy and security are emerging challenges for digital media. JPEG has determined that blockchain technology has great potential as a technology component to address these challenges in transparent and trustable media transactions. However, blockchain needs to be integrated closely with a widely adopted standard to ensure broad interoperability of protected images. JPEG calls for industry participation to help define use cases and requirements that will drive the standardization process. To reach this objective, JPEG issued a white paper entitled “Towards a Standardized Framework for Media Blockchain” that elaborates on the initiative, exploring relevant standardization activities, industrial needs and use cases. In addition, JPEG plans to organise a workshop during its 81st meeting in Vancouver on Tuesday 16th October 2018. More information about the workshop is available on https://www.jpeg.org. To keep informed and get involved, interested parties are invited to register on the ad hoc group’s mailing list at http://jpeg-blockchain-list.jpeg.org.

At its Berlin meeting, a first version of the verification model software for light field coding has been produced. This software supports the core functionality that was indented for the light field coding standard. It serves for intensive testing of the standard. JPEG Pleno Light Field Coding supports various sensors ranging from lenslet cameras to high-density camera arrays, light field related content production chains up to light field displays.

For coding of point clouds and holographic data, activities are still in exploratory phase addressing the elaboration of use cases and the refinement of requirements for coding such modalities. In addition, experimental procedures are being designed to facilitate the quality evaluation and testing of technologies that will be submitted in later calls for coding technologies. Interested parties active in point cloud and holography related markets and applications, both from industry and academia are welcome to participate in this standardization activity.

“After a record number of ballots and output documents generated during its 80th meeting, the JPEG Committee pursues its activity on the specification of effective and reliable solutions for image coding offering needed features in emerging multimedia applications. The new JPEG XS and JPEG 2000 part 15 provide low complexity compression solutions that will benefit many growing markets such as content production, virtual and augmented reality as well as autonomous cars and drones.” said Prof. Touradj Ebrahimi, the Convenor of the JPEG Committee.

The JPEG Committee nominally meets four times a year, in different world locations. The 80th JPEG Meeting was held on 7-13 July 2018, in Berlin, Germany. The next 81st JPEG Meeting will be held on 13-19 October 2018, in Vancouver, Canada.