The 84th JPEG meeting was held in Brussels, Belgium.

This meeting was characterised by significant progress in most of JPEG projects and also exploratory studies. JPEG XL, the new image coding system, has issued the Committee Draft, giving shape to this new effective solution for the future of image coding. JPEG Pleno, the standard for new imaging technologies, Part 1 (Framework) and Part 2 (Light field coding) have also reached Draft International Standard status.

Moreover, exploration studies are ongoing in the domain of media blockchain and on the application of learning solutions for image coding (JPEG AI). Both have triggered a number of activities providing new knowledge and opening new possibilities on the future use of these technologies in future JPEG standards.

The 84th JPEG meeting had the following highlights: 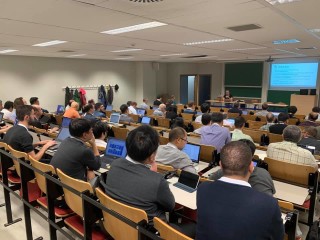 In the following, a short description of the most significant activities is presented.

The JPEG XL Image Coding System (ISO/IEC 18181) has completed the Committee Draft of the standard. The new coding technique allows storage of high-quality images at one-third the size of the legacy JPEG format. Moreover, JPEG XL can losslessly transcode existing JPEG images to about 80% of their original size simplifying interoperability and accelerating wider deployment.

The JPEG XL reference software, ready for mobile and desktop deployments, will be available in Q4 2019. The current contributors have committed to releasing it publicly under a royalty-free and open source license.

A significant milestone has been reached during this meeting: the Draft International Standard (DIS) for both JPEG Pleno Part 1 (Framework) and Part 2 (Light field coding) have been completed. A draft architecture of the Reference Software (Part 4) and developments plans have been also discussed and defined.

JPEG Pleno holography activities had significant advances on the definition of use cases and requirements, and description of Common Test Conditions. New quality assessment methodologies for holographic data defined in the framework of a collaboration between JPEG and Qualinet were established. Moreover, JPEG Pleno continues collecting microscopic and tomographic holographic data.

The JPEG Committee continues to carry out exploration studies with deep learning-based image compression solutions, typically with an auto-encoder architecture. The promise that these types of codecs hold, especially in terms of coding efficiency, will be evaluated with several studies. In this meeting, a Common Test Conditions was produced, which includes a plan for subjective and objective quality assessment experiments as well as coding pipelines for anchor and learning-based codecs. Moreover, a JPEG AI dataset was proposed and discussed, and a double stimulus impairment scale experiment (side-by-side) was performed with a mix of experts and non-experts in a controlled environment.

Fake news, copyright violation, media forensics, privacy and security are emerging challenges in digital media. JPEG has determined that blockchain and distributed ledger technologies (DLT) have great potential as a technology component to address these challenges in transparent and trustable media transactions. However, blockchain and DLT need to be integrated closely with a widely adopted standard to ensure broad interoperability of protected images. JPEG calls for industry participation to help define use cases and requirements that will drive the standardization process. In order to clearly identify the impact of blockchain and distributed ledger technologies on JPEG standards, the committee has organised several workshops to interact with stakeholders in the domain.

The 4th public workshop on media blockchain was organized in Brussels on Tuesday the 16th of July 2019 during the 84th ISO/IEC JTC 1/SC 29/WG1 (JPEG) Meeting. The presentations and program of the workshop are available on jpeg.org.

The JPEG Committee has issued an updated version of the white paper entitled “Towards a Standardized Framework for Media Blockchain” that elaborates on the initiative, exploring relevant standardization activities, industrial needs and use cases.

At the 84th meeting, IS text reviews for ISO/IEC 19566-5 JUMBF and ISO/IEC 19566-6 JPEG 360 were completed; IS publication will be forthcoming.  Work began on adding functionality to JUMBF, Privacy & Security, and JPEG 360; and initial planning towards developing software implementation of these parts of JPEG Systems specification.  Work also began on the new ISO/IEC 19566-7 Linked media images (JLINK) with development of a working draft.

The JPEG Committee is pleased to announce new Core Experiments and Exploration Studies on compression of raw image sensor data. The JPEG XS project aims at the standardization of a visually lossless low-latency and lightweight compression scheme that can be used as a mezzanine codec in various markets. Video transport over professional video links (SDI, IP, Ethernet), real-time video storage in and outside of cameras, memory buffers, machine vision systems, and data compression onboard of autonomous vehicles are among the targeted use cases for raw image sensor compression. This new work on raw sensor data will pave the way towards highly efficient close-to-sensor image compression workflows with JPEG XS.

“Completion of the Committee Draft of JPEG XL, the new standard for image coding is an important milestone. It is hoped that JPEG XL can become an excellent replacement of the widely used JPEG format which has been in service for more than 25 years.” said Prof. Touradj Ebrahimi, the Convenor of the JPEG Committee.

More information about JPEG and its work is available at www.jpeg.org.