JPEG XS is now entering the final phases of the standard definition and soon will be available. It is important to clarify the change on the typical JPEG approach, as this is the first JPEG image compression standard that is not developed only targeting the best compression performance for the best perceptual quality. Instead, JPEG XS establishes a compromise between compression efficiency and low complexity. This new approach is also complemented with the development of a new part for the well-established JPEG 2000, named High Throughput JPEG 2000.

With these initiatives, JPEG committee is standardizing low complexity and low latency codecs, with a slight sacrifice of the compression performance usually seek in previous standards. This change of paradigm is justified considering the current trends on multimedia technology with the continuous grow on devices that are usually highly dependent of battery life cycles, namely mobiles, tablets, and also augmented reality devices or autonomous robots. Furthermore this standard provides support for applications like Omnidirectional video capture or real time video storage and streaming applications. Nowadays, networks tend to grow in available bandwidth. The memory available in most devices has also been reaching impressive numbers. Although compression is still required to simplify the large amount of data manipulation, its performance might become secondary if kept into acceptable levels. As it is obvious, considering the advances in coding technology of the last 25 years, these new approaches define codecs with compression performances largely above the JPEG standard used in most devices today. Moreover, they provide enhanced capabilities like HDR support, lossless or near lossless modes, or alpha plane coding.

On the 77th JPEG meeting held in Macau, China, from 21st to 27th of October several activities have been considered, as shortly described in the following. 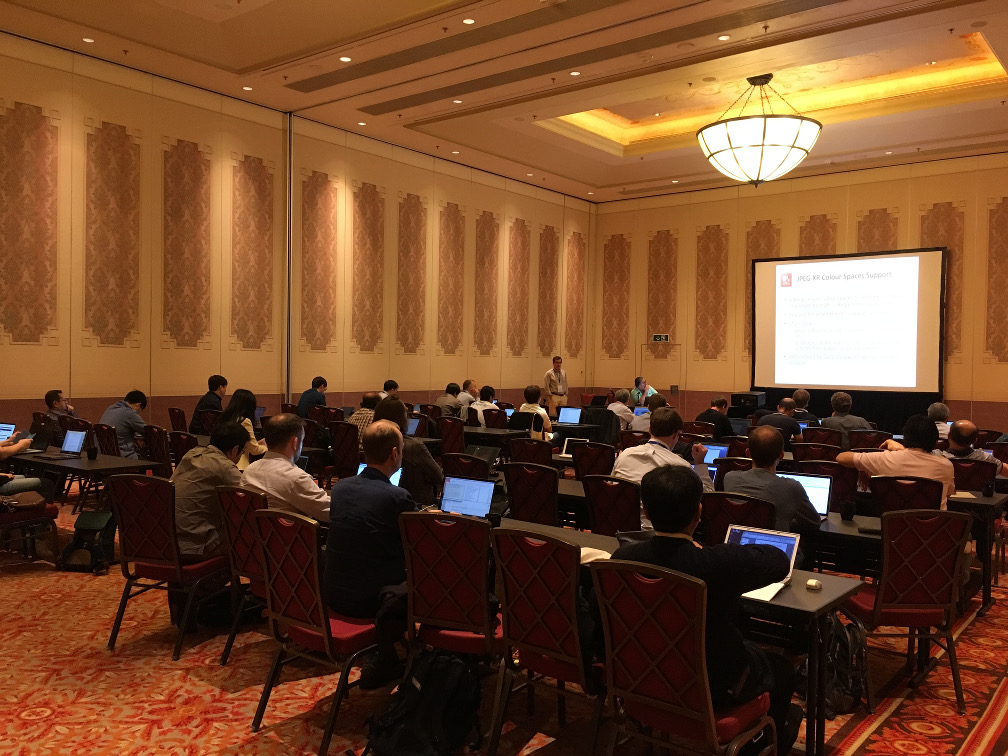 Moreover, a celebration of the 25th JPEG anniversary where early JPEG committee members from Asia have been awarded has taken place.

The different activities are described in the following paragraphs.

JPEG Privacy & Security is a work item (ISO/IEC 19566-4) aiming at developing a standard that provides technical solutions, which can ensure privacy, maintaining data integrity and protecting intellectual property rights (IPR). A Call for Proposals was published in April 2017 and based on descriptive analysis of submitted solutions for supporting protection and authenticity features in JPEG files, a working draft of JPEG Privacy & Security in the context of JPEG Systems standardization was produced during the 77th JPEG meeting in Macau, China. To collect further comments from the stakeholders in this filed, an open online meeting for JPEG Privacy & Security will be conducted before the 78th JPEG meeting in Rio de Janeiro, Brazil, on Jan. 27-Feb 2, 2018. JPEG Committee invites interested parties to the meeting. Details will be announced in the JPEG Privacy & Security AhG email reflector.

The JPEG Committee has issued a “Draft Call for Proposals (CfP) on JPEG 360 Metadata” at the 77th JPEG meeting in Macau, China. The JPEG Committee notes the increasing use of multi-sensor images from multiple image sensor devices, such as 360 degree capturing cameras or dual-camera smartphones available to consumers. Images from these cameras are shown on computers, smartphones and Head Mounted Displays (HMDs). JPEG standards are commonly used for image compression and file format to store and share such content. However, because existing JPEG standards do not fully cover all new uses, incompatibilities have reduced the interoperability of 360 images, and thus reduce the widespread ubiquity, which consumers have come to expect when using JPEG-based images. Additionally, new modalities for interaction with images, such as computer-based augmentation, face-tagging, and object classification, require support for metadata that was not part of the scope of the original JPEG. To avoid fragmentation in the market and to ensure interoperability, a standard way of interaction with multi-sensor images with richer metadata is desired in JPEG standards. This CfP invites all interested parties, including manufacturers, vendors and users of such devices to submit technology proposals for enabling interactions with multi-sensor images and metadata that fulfill the scope, objectives and requirements.

The JPEG Committee is continuing its work towards the creation of a new Part 15 to the JPEG 2000 suite of standards, known as High Throughput JPEG 2000 (HTJ2K).

Since the release of an initial Call for Proposals (CfP) at the outcome of its 76th meeting, the JPEG Committee has completed the software test bench that will be used to evaluate technology submissions, and has reviewed initial registrations of intent. Final technology submissions are due on 1 March 2018.

This project aims at the standardization of a visually lossless low-latency lightweight compression scheme that can be used as a mezzanine codec for the broadcast industry, Pro-AV and other markets. Targeted use cases are professional video links, IP transport, Ethernet transport, real-time video storage, video memory buffers, and omnidirectional video capture and rendering. After four rounds of Core Experiments, the Core Coding System has now been finalized and the ballot process has been initiated.

Additional parts of the Standard are still being specified, in particular future profiles, as well as transport and container formats. The JPEG Committee therefore invites interested parties – in particular coding experts, codec providers, system integrators and potential users of the foreseen solutions – to contribute to the further specification process. Publication of the International Standard is expected for Q3 2018.

This standardization effort is targeting the generation of a multimodal framework for the exchange of light field, point cloud, depth+texture and holographic data in end-to-end application chains. Currently, the JPEG Committee is defining the coding framework of the light field modality for which the signalling syntax will be specified in part 2 of the JPEG Pleno standard. In parallel, JPEG is reaching out to companies and research institutes that are active in the point cloud and holography arena and invites them to contribute to the standardization effort. JPEG is seeking for additional input both at the level of test data and quality assessment methodologies for this specific type of image modalities as technology that supports their generation, reconstruction and/or rendering.

The JPEG Committee has launched a Next-Generation Image Compression Standardization activity, also referred to as JPEG XL. This activity aims to develop a standard for image compression that offers substantially better compression efficiency than existing image formats (e.g. >60% over JPEG-1), along with features desirable for web distribution and efficient compression of high-quality images.

The JPEG Committee intends to issue a final Call for Proposals (CfP) following its 78th meeting (January 2018), with the objective of seeking technologies that fulfill the objectives and scope of the Next-Generation Image Compression Standardization activity.

A draft Call for Proposals, with all related info, has been issued and can be found in JPEG website. Comments are welcome and should be submitted as specified in the document.

To stay posted on the action plan for JPEG XL, please regularly consult our website at jpeg.org and/or subscribe to our e-mail reflector. You will receive information to confirm your subscription, and upon the acceptance of the moderator will be included in the mailing-list.

Along with its celebration of the 25th anniversary of the commonly known JPEG still image compression specifications, The JPEG Committee has launched an activity to fill a long-known gap in this important image coding standard, namely the definition of a JPEG reference software. For its 77th meeting, The JPEG Committee collected submissions for a reference software that were evaluated for suitability, and started now the standardization process of such software on the basis of submissions received. 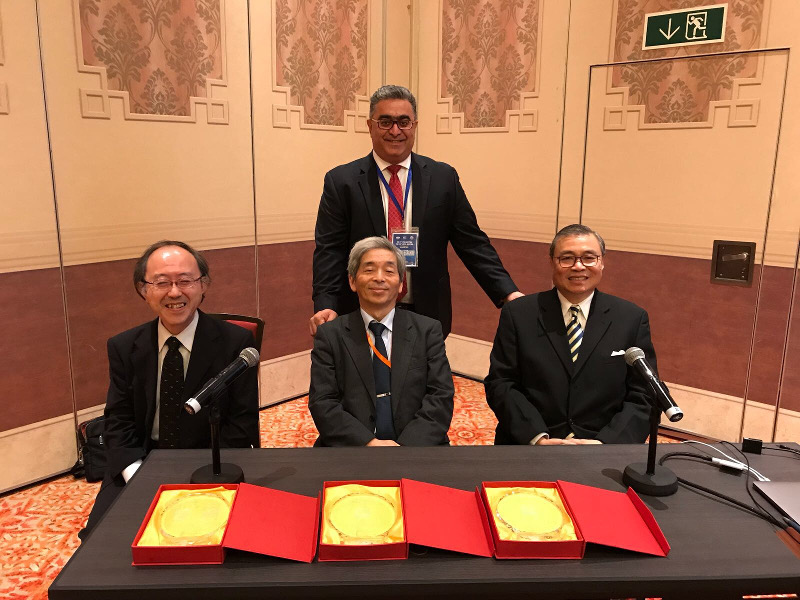 The JPEG Committee had a 25th anniversary celebration of its first standard in Macau specifically organized to honour past committee members from Asia, and was proud to award Takao Omachi for his contributions to the first JPEG standard, Fumitaka Ono for his long lasting contributions to JBIG and JPEG standards, and Daniel Lee for contributions to JPEG family of standards and long lasting services as Convenor of the JPEG Committee. The celebrations of the anniversary of this successful standard that is still growing in its use after 25th years will have a third and final event during the 79th JPEG meeting planned in La Jolla, CA, USA.

“JPEG is committed to design of specifications that ensure privacy and other security and protection solutions across the entire JPEG family of standards” said Prof. Touradj Ebrahimi, the Convener of the JPEG committee.

More information about JPEG and its work is available at www.jpeg.org or by contacting Antonio Pinheiro and Frederik Temmermans of the JPEG Communication Subgroup at pr@jpeg.org.